Strictly Come Dancing kicked off the winners at the first ever socially-distanced British Academy Television Awards in London’s Television Centre on Friday.

The beloved dance series scooped the Entertainment Programme for the second year in a row, with judge Bruno Tonioli also unveiling his new grey hair as he accepted the prize.

Due to the COVID-19 pandemic, many stars have been forced to stay at home for the usually lavish and glitzy awards ceremony, which was originally due to take place in March. 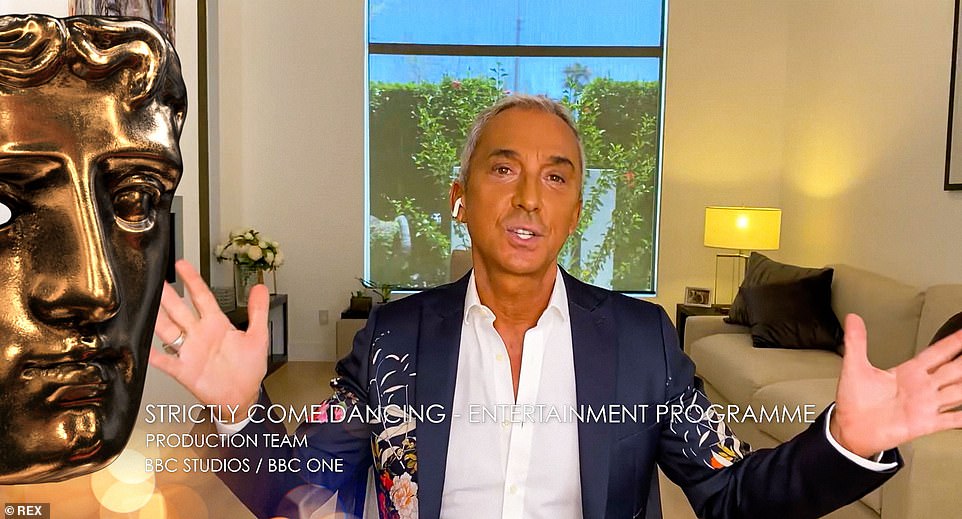 Look at that! Strictly Come Dancing kicked off the winners at the first ever socially-distanced British Academy Television Awards in London’s Television Centre on Friday, as Bruno Tonioli unveiled his new grey hair

Many of Strictly’s biggest stars appeared from their homes to accept the prize, including Bruno, who is reportedly not set to appear in the upcoming series due to travel concerns around the coronavirus crisis.

Tess Daly gushed: ‘Thank you so much BAFTA this is such an honour it’s the second time we’ve won this award, and it’s for the whole team who worked so hard.’

Claudia Winkleman added: ‘To everyone at the BBC, huge thanks to our fantastic executive poducer, and I’ve just got to mention them, no one has judges like us.’

Launching a confetti cannon, Judge Craig Revel-Horwood also gushed: ‘Ty darlings and thanks to you too Tess and Claudia, can I say ladies you too are simply fabulous.

Shirley Ballas and Motsi Mabuse also offered their own thanks, with Bruno saying: ‘The biggest thank you goes to all of you our viewers, I tell you without you you will not be here, and I really hope to keep you entertained and happy for many years to come.’

Opening the show, host Richard Ayoade was quick to poke fun at the nation’s social distancing measures, saying: ‘It is sad that it has taken a pandemic to enforce the most basic parameters of personal space.’

Tim Minchin also took to the stage to perform an extremely tongue-in-cheek song about the year’s past, which inevitably included a reference to the COVID-19 pandemic.

Normal People’s Daisy Edgar-Jones and Paul Mescal presented the first award of the evening, Entertainment Performance to Mo Gilligan for The Lateish Show with Mo Gilligan.

Clearly stunned by the win, he said: ‘I was not prepared for this, I wrote a speech this is an incredible honour.

‘As a personal note this awards means so much to me I can’t tell you, even the names I’m with it blows my mind to be here, and it gives hope to people who look like me, talk like me and have the same background as me.’ 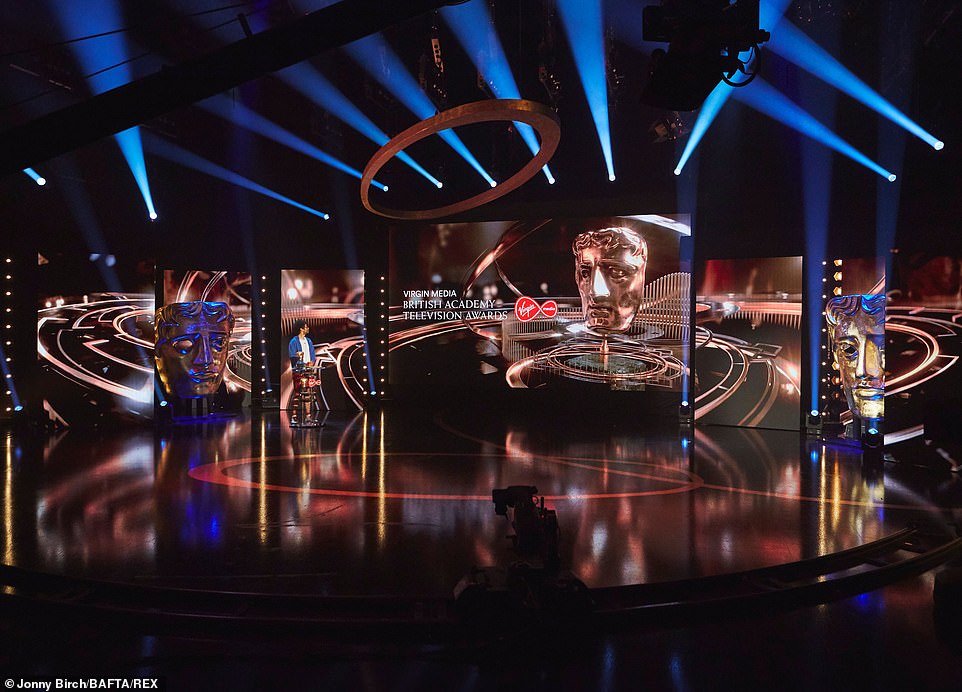 Making history: The BAFTA Virgin Media British Academy Television Awards were held in a closed studio after the original date was postponed due to the coronavirus outbreak

Ahead of the ceremony, Tom Allen hosted an online pre-show that featured interviews with some of the stars nominated.

The BAFTA Virgin Media British Academy Television Awards are being held in a closed studio after the original date was postponed due to the coronavirus outbreak.

The BAFTA Television Craft Awards and Virgin Media British Academy Television Awards were originally scheduled for 26 April and 17 May.

Organisers confirmed at the time that following government advice they had opted to reschedule the ceremonies until later in the year.

In a tweet posted the official BAFTA account on 17 March, organisers confirmed that ‘following the latest government advice, we regret to announce that the BAFTA Television Craft Awards and Virgin Media British Academy Television Awards, originally scheduled for 26 April & 17 May, will be postponed until later in the year’.

The awards show was held at Television Centre and in accordance with government guidelines the ceremony was socially distanced, with nominees accepting their prizes virtually. 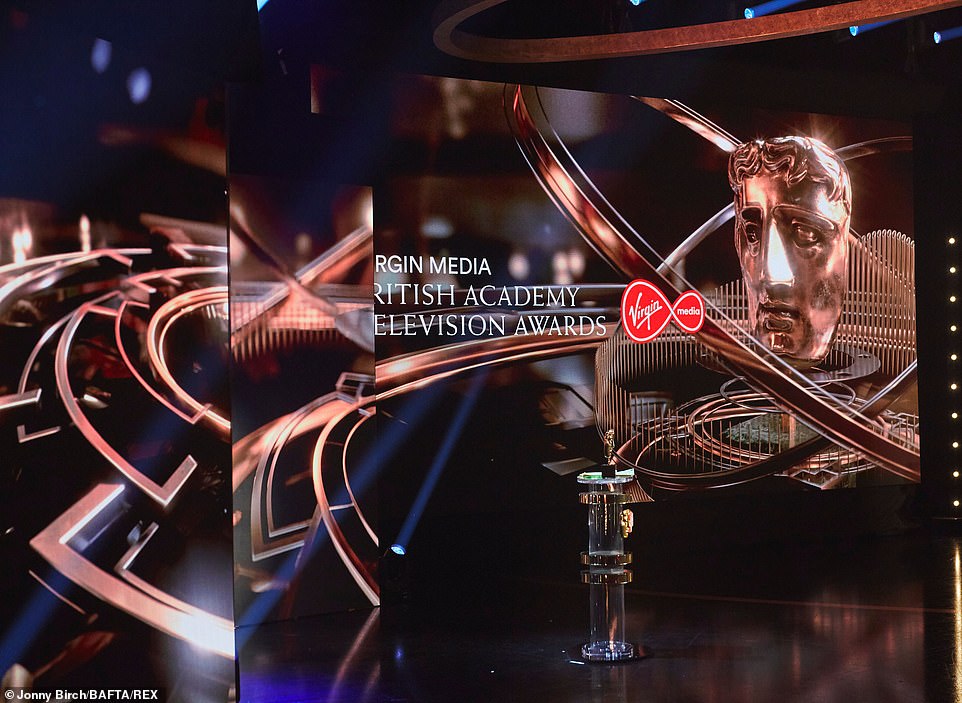 Long-awaited: Organisers confirmed in March that following government advice they had opted to reschedule the ceremonies until later in the year

Making his debut as host of the all-star ceremony, actor and comedian Richard Ayoade steered audiences through this years’ nominations, with nominees invited to get involved through video link-ups.

Richard, who has himself won a BAFTA, previously joked about hosting the socially distanced programme: ‘I am as surprised as you are that this is still going ahead.’

Earlier this month the full list of nominations for the BAFTA Television Awards 2020 were announced.

Chernobyl, Fleabag, The Crown, Giri/Haji and The Virtues all lead the way with three nominations each.

Sky Atlantic’s Chernobyl has taken the world by storm and scored a higher IMDb rating than Game Of Thrones and Breaking Bad. 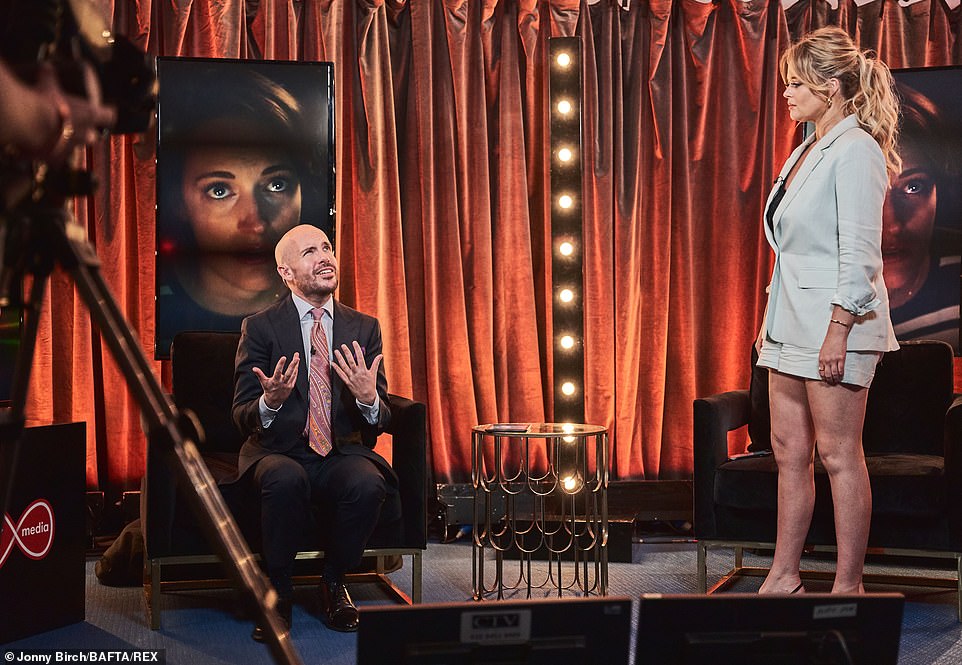 Exciting: Ahead of the star-studded ceremony, Tom Allen presented a pre-show that was streamed live for fans on YouTube, and chatted to Emily Atack about the award for Must-See TV Moment 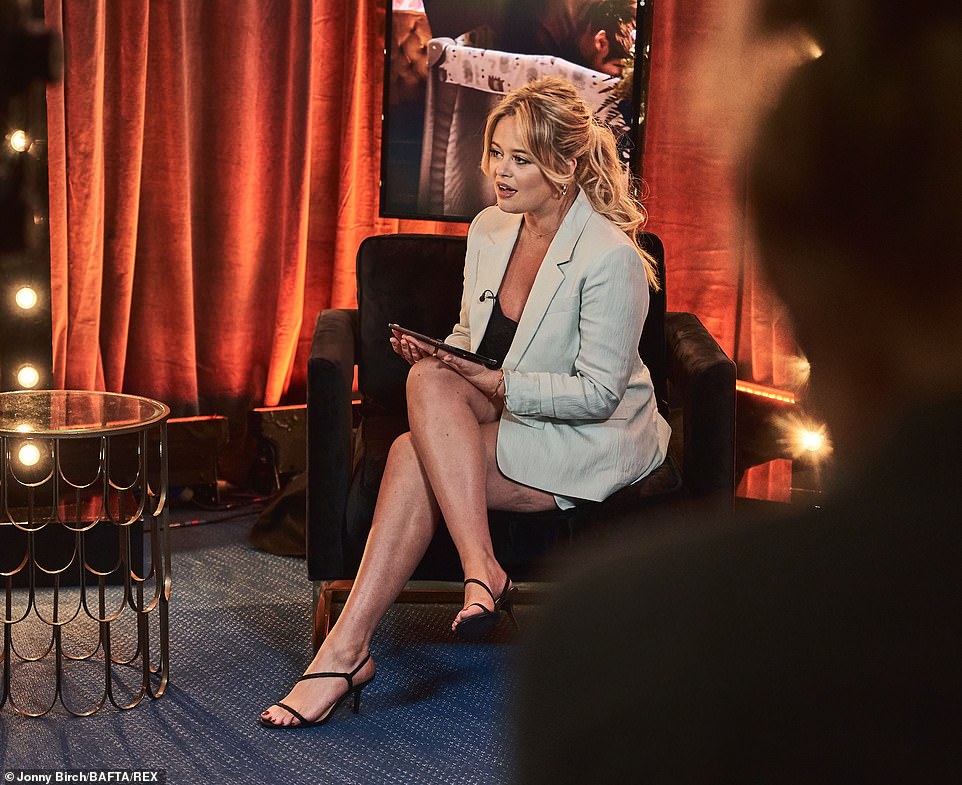 Gorgeous: The former Inbetweeners star sported a stylish shorts suit as she chatted to Tom about the nominees for the award, which is the only prize voted for by the public

The five-part series follows an investigative commission appointed in the wake of the devastating nuclear accident on April 26, 1986.

Actors Jared Harris and Stellan Skarsgard have been recognised in the Leading Actor and Supporting Actor categories.

Elsewhere, Girl/Haji has also picked up nominations. The eight-part series is set in England and Japan with dialogue in English and subtitled Japanese, and has a pair of brothers at its heart, Kenzo and Yuto Mori.

Kenzo is a respectable Tokyo-based detective, and Yuto is rumoured to be part of the Japanese mafia, the Yakuza, and is lying low in London after allegedly murdering a Japanese businessman there.

Nominations include Takehiro Hira in the Leading Actor category and Supporting Actor (for Will Sharpe) at the awards.

Channel 4 drama The Virtues, starring Line of Duty’s Stephen Graham has picked up nominations in the Leading Actor, Mini-Series and Supporting Actress (for Helen Behan) categories.

Sex Education picked up a nod in the Breakthrough Talent for Male Performance in a Comedy Programme (for Ncuti Gatwa).

Rounding off the top nominees, Top Boy, which was revived in 2019, has scored a nod for Supporting Actress (for Jasmine Jobson) categories.

Notable snubs include EastEnders, which won Best Soap at the 2019 awards, but has failed to be nominated at the 2020 show.

The shortlist was selected by an independent BAFTA-approved jury of media experts, with BAFTA Television Committee Chair Hannah Wyatt heading the group.

While the BAFTA Television Awards is typically a glitzy affair, winners will accept their awards from home, while presenters will appear live in the studio.

Richard will also be joined virtually by some big names in television including Billy Porter, Chris O’Dowd, David Tennant, Jeff Goldblum, Kermit the Frog, Miss Piggy, Michael Sheen and Ruth Madeley, who will be presenting awards via video link.

Audiences will also be treated to two performances from internationally-acclaimed comedian, musician, actor and writer Tim Minchin, including an original song composed specially for the event.

British actor, writer and producer Idris Elba will receive the Special Award, one of BAFTA’s highest accolades, in recognition of his exceptional career and commitment to championing diversity and new talent in the industry. There will also be some very special surprise guests dialling in to present his award on the night.

The winner of the Virgin Media’s Must-See Moment Award will also be announced. As the only award to be voted for by the public, the Must-See Moment celebrates the dramatic scenes, cliff hangers and edge-of-your-seat moments that truly resonated with TV fans across the UK.

The conclusion to last year’s Gavin and Stacey Christmas special, in which Ruth Jones’ character Nessa proposed to James Corden’s alter-ego Smithy, is among the contenders in the shortlist, which is voted for by the British public.

Line Of Duty’s shock killing of undercover police officer John Corbett, played by Stephen Graham, is up for the award, while the scene where Arya Stark kills the Night King in the final season of Game Of Thrones also got a nod.

Elsewhere, BAFTA also responded to criticism of its lack of diversity by nominating three times as many BAME actors and performers as last year’s TV awards show.

Nine stars including Sex Education’s Ncuti Gatwa, The End of the F***ing World’s Naomi Ackie and comedians Guz Khan and Mo Gilligan are among those nominated for the individual awards.

They make up around a third of all those nominated, a marked improvement on the three from last year.

BAFTA has come under fire for its lack of representation in both its film and TV award shows in recent years.

In January, there was a furore after BAFTA failed to nominate a single actor of colour for its film awards show, and #BAFTAsSoWhite trended worldwide on social media.

The Hunt For Jihadi John

The End of the F***ing World

Lee Mack for Would I Lie To You

Our Dementia Choir with Vicky McClure

The Misadventures of Romesh Ranganathan

Joe Lycett’s Got Your Back

FEMALE PERFORMANCE IN A COMEDY PROGRAMME

When They See Us

Stephen Graham for The Virtues

Callum Turner for The Capture

Samantha Morton for I Am Kirsty

Glenda Jackson for Elizabeth Is Missing

MALE PERFORMANCE IN A COMEDY PROGRAMME

Victoria Derbyshire: Men who lost loved ones to knife crime

Race Across The World

David Harewood: Psychosis and Me

8 Days: To The Moon and Back

Joe Absolom for A Confession

Josh O’Connor for The Crown

Will Sharpe for Giri/Haji

Helen Behan for The Virtues

Helena Bonham Carter for The Crown

Naomi Ackie for The End of the F***ing World

VIRGIN MEDIA’S MUST-SEE MOMENT (voted for by the public)

Aisling Bea (Writer) for This Way Up

Caroline McCall for His Dark Materials

Michele Clapton for Game of Thrones

Arthur Cary for The Last Survivors

Shane Meadows for The Virtues

Bridget Caldwell for The Royal British Legion’s Festival of Remembrance

Andy R. Worboys for Untouchable: The Rise and Fall of Harvey Weinstein

Kim Horton for 63 Up

Inma Azorin for The Trial of Christine Keeler

Kirstin Chalmers for Catherine The Great

Andrew Phillips for War In The Blood

PHOTOGRAPHY: FACTUAL sponsored by The Farm

PATRICK SMITH, NEIL HARVEY for Untouchable: The Rise and Fall of Harvey Weinstein

Adriano Goldman for The Crown

Suzie Lavelle for His Dark Materials

SOUND TEAM for Battle of the Brass Bands

SOUND TEAM for The Crown

Alex Maclean for The Durrells

Elastic for Catherine the Great

Charlie Covell for The End of the F***ing World 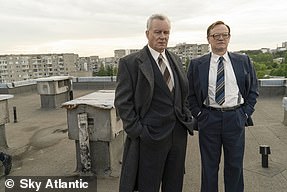