Products featured are independently selected by our editorial team and we may earn a commission from purchases made from our links; the retailer may also receive certain auditable data for accounting purposes.

It’s easy to think the only way to truly enjoy your music is getting gear labeled “audiophile,” but that’s far from the case.

We’ve collected the best sounding Bluetooth speakers you can get for under $100. They share many of the same features you’d find in higher-end audio gear, but in a shrunken down form. Their audio quality is supplemented by additional features like durability (specifically resistance to water), and portability, which you won’t find in home theater equipment.

If you need a speaker (or two) to take with you to the beach, provide some entertainment during a party, or play background music while you work or relax, you’ll find what you’re looking for below.

What Are the Best Bluetooth Speakers Under $100?

There are many factors to consider when choosing the best Bluetooth speaker under $100 for you; below are the most important ones, which we considered while we were researching this list.

Bluetooth: We’ve chosen Bluetooth speakers because the wireless standard has been widely adopted, so our picks will work with your phone, tablet, or computer regardless of who makes it.

Battery: All of the speakers we’re recommending are totally wireless, which means they run on battery power. Our minimum requirement was eight hours of music playback for charge, but almost all of our recommendations last a lot longer.

Size and Weight: One of the benefits of getting a wireless Bluetooth speaker is the option to carry it around with you. The Bluetooth speakers in this guide all weigh under two and a half pounds, and most way well under one and a half.

Durability: An electronic device’s resistance to dust and water is measured on the IP (Ingress Protection) scale. Many of the speakers below have an IP67 or IPX7 rating, which means they can be submerged under 3.3ft (feet) of water for up to 30 minutes.

Multi-Speaker Pairing: A relatively new feature to Bluetooth speakers is the ability to pair two or more of them together to create a multi-room wireless audio system. All but one of the Bluetooth speakers we’ve researched for this guide support this feature. 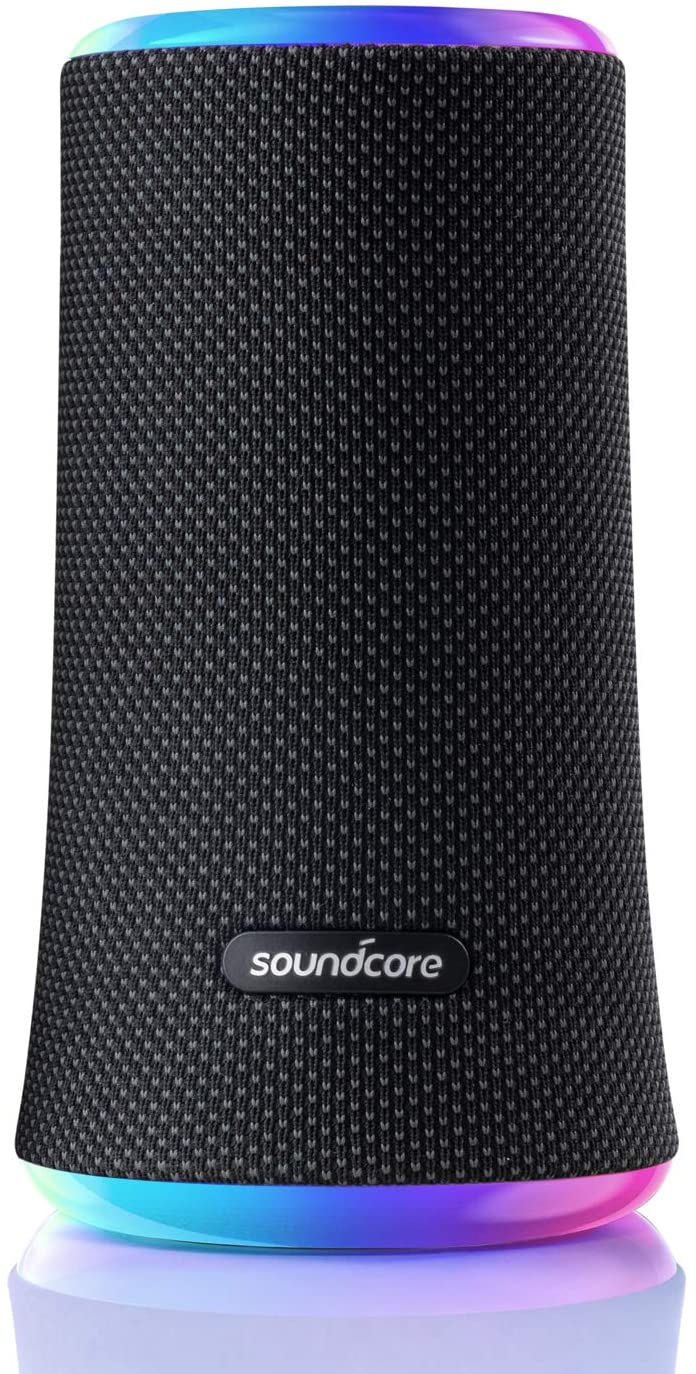 Soundcore’s Flare 2 is the latest in the company’s line of miniaturized party speakers, and it’s a fun, well-rounded option.

It’s a 360-degree speaker, which means you don’t have to have it pointed in a particular direction, or sit in a “sweet spot,” to hear it clearly. I’ve tested the speaker for myself, and was impressed at how it sounded out of the box. The music and podcasts I listened to sounded pretty clear, even at higher volumes. I was also able to test the Soundcore Flare 2’s multi-speaker pairing function, which was easy to set up, and worked well. You can link up to 100 Flare 2 speakers together to create a massive wireless audio system, but there’s no option to pair two together for stereo sound.

While the Flare 2 sounded good to my ears, Soundcore outfitted it with a BassUp mode, which boosts the low end, and allows you to customize the speakers’ EQ (equalizer) in the Soundcore app (iOS and Android).

At 1.3 pounds, the Soundcore Flare 2 is one of the heavier speakers in our guide, but not by much. The reason for the extra heft is that the Flare’s standout feature: a pair of light rings around the top drawer bottom that pulse to your music. You can switch between six different light modes in the Soundcore app, or turn them off altogether by pushing a button on top of the speaker. I’ve tried several of Soundcore’s Flare speakers, and actually like the light show; it’s attention grabbing without being annoying. Enabling this feature will eat into the speaker’s battery life, though, so you probably won’t get the full 12-hours of playtime the Flare 2 is capable of.

The Soundcore Flare 2 earned an IPX7 durability rating, which means it’s totally dustproof, and can be submerged under 3.3ft of water for up to 30 minutes. You won’t have to worry about this speaker getting splashed, or accidentally falling into the pool.

If you want a portable Bluetooth speaker that provides an audio and visual experience, and sounds great on its own or when paired with a second speaker, Soundcore’s Flare 2 is a good pick.

The Flip 4 is one of the latest entries in JBL’s series of ultra-durable portable Bluetooth speakers.

One of the greatest strengths is its size; at 1.14 pounds and 6.89-inches long, this is the smallest speaker we’re recommending. That said, JBL packed a pair of passive radiators (a driver not connected directly to an amplifier), which allows it to get loud without distorted. I’ve tried the previous version of this speaker and it filled the better part of an open backyard with music (a mix of rock, pop, and country) that sounded great.

Although it sounds very good on its own, you can connect two Flip 4 speakers together to create a stereo pair, or up to 100 if you want a large, wireless, mono audio system. Connecting multiple Flip 4 speakers together requires the JBL Connect+ app (iOS and Android). The Flip 4 has earned an IP67 durability rating, which means it’s totally dustproof, and can be submerged in under 3.3ft of water for up to 30 minutes. JBL says it can get up to 12 hours of battery life on a single charge, which is more than enough to get you through a full day of listening.

If you want a great-sounding Bluetooth speaker that’s waterproof and easy to carry around, JBL’s Flip 4 is the right pick.

The SRS-XB23 is the latest in Sony’s portfolio of “Xtra” bass speakers, but its well worth considering even if you don’t listen to music with a lot of low end. Its drivers (the part of a speaker responsible for creating sound) were stretched to help optimize the tube-sharped speaker’s sound. Like JBL’s Flip 4, this speaker has a pair of passive radiators to give it a bit of extra oomph.

In my experience, Sony’s XB-series headphones and speakers have boomy bass that doesn’t overpower the midrange or treble. If you want to tune the SRS-XB23 to your liking, you can adjust its EQ in Sony’s Music Center app. The app also allows you to curate playlists with your local music library if you don’t like your device’s built-in music app.

Despite the audio technology inside, the SRS-XB23 is pretty small. At 1.26 pounds and 9.09-inches long, the slender speaker will fit neatly in a beach bag or backpack. Its size didn’t impact battery life, either, because Sony says the SRS-XB23 can last up to 12 hours per charge. This speaker has earned an IP67 durability rating, which means it’s totally dustproof, and can be submerged in up to 3.3ft of water for up to 30 minutes. Sony also says the SRS-XB23 is “shockproof,” but doesn’t go into more detail about this feature.

You can connect two SRS-XB23s together to create a stereo pair, or up to 100 using Sony’s Party Connect mode. These settings can be accessed by pushing buttons on the back of the speaker, and don’t require you to download Sony’s Music Center app.

Whether you listen to music that could use some extra bass, or want a smaller speaker that lets you fine-tune the way it sounds, Sony’s SRS-XB23 is the right call. 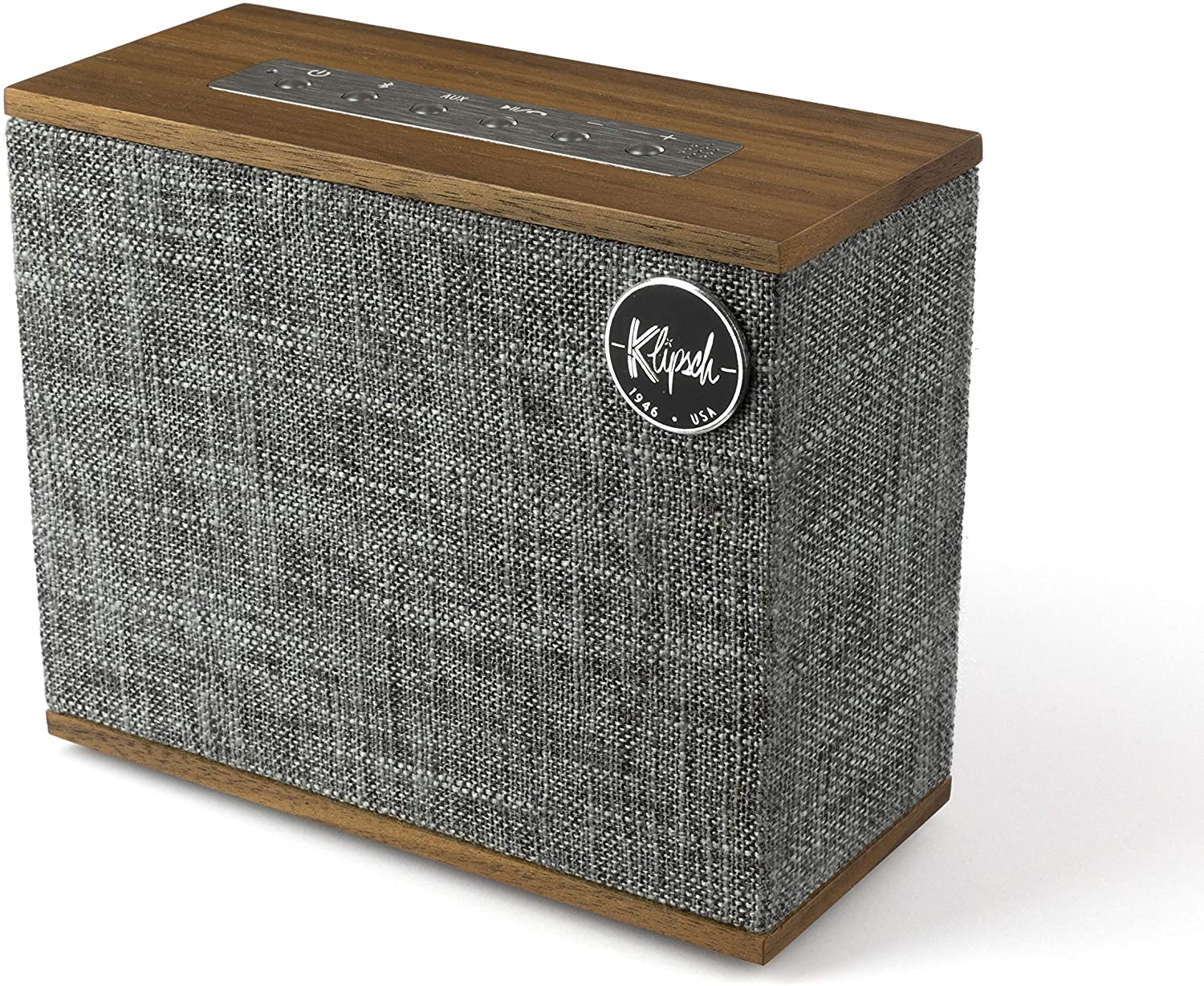 Klipsch’s Heritage Groove is a portable Bluetooth speaker whose aesthetics match the audio technology inside.

The box-shaped speaker is 6-inches wide, 5-inches tall, and weighs 2.1 pounds, which means its the biggest and heaviest recommendation in this guide. This is partly because Klipsch used materials like real wood veneer when designing the Heritage Groove. But it’s not all about looks, the speaker also features a large, 3-inch driver, plus a pair of passive bass radiators. The drivers are all powered by a DSP (digital signal processor) that Klipsch says delivery’s “dynamic sound” at any volume level.

While the Heritage Groove is a portable speaker, it’s the kind you’re going to want to keep indoors. It gets eight hours of battery life per charger, and Klipsch doesn’t offer an IP rating, which means this speaker probably won’t mix well with water or dust. It’s also the only speaker we’re recommending that cannot be paired with an additional speaker in any capacity.

None of these problems are a big deal if you want a portable Bluetooth speaker to take between a home office, living room, or kitchen, but this isn’t the right one to bring with you to the beach.

Who plays gaston in the new beauty and the beast

Disney Parody Of 'WAP' is Fantastic!!!

Monty Don opens up on childhood trauma with ‘frightening’ father: ‘He killed people’

Hulu Is Adding These Titles In October 2020 – Full List Here!