Products featured are independently selected by our editorial team and we may earn a commission from purchases made from our links; the retailer may also receive certain auditable data for accounting purposes.

Whether you’re trying to reduce your chances of getting sick, want to clear your space of smoke, or want to get rid of unpleasant odors, an air purifier is an essential device to have in any home or office, to keep your air clean and germ-free. The best air purifiers suck up particles, filter the potentially hazardous ones, and blow fresh air into your room. I’ve used an air purifier for the last six months, and I have noticed a surprising difference in how well I’m breathing (not to mention how much better I’m sleeping at night too).

There are many air purifiers out there, so it can be hard to know which one to get. Our guide explains what to look for, and recommends the best ones we’ve found.

What Are the Best Air Purifiers?

There are many factors to consider when choosing the right air purifier for you; below are the most important ones, which we considered while we were researching this list.

Size: Air purifiers come in all shapes and sizes, so we considered options that will stay in one room, and others that can be easily moved around.

Coverage area: An air purifier’s size and power will determine how big of a space it can cover. Some work best for an office desk or bathroom, while others can clean the air in a large basement. Our guide covers the entire spectrum, and it may make sense for you to get a couple of air purifiers for different purposes.

The Best Outdoor Coolers For Camping, Road Trips and Tailgating

The Best Face Masks for Running, Cycling and Working Out [Updated]

Jonestown: 13 Things You Should Know About Cult Massacre

Before the Landslide: Inside the Early Years of Fleetwood Mac

Particle size: Air particles — both good and bad — are measured in microns. The CDC says the most harmful air particles are between .9 and .3 microns because they can get through the human body’s natural defense system to damage your lungs, or get in your blood. We made sure that all of our air purifiers can filter out particles as low as .3 microns, so you don’t have to worry. These air purifiers help rid your space of everything from smoke to pollen to dust mites, and even smaller particles you may not be aware of.

Filtration system: Every air purifier uses its own multi-stage process to clean your air. They vary a little bit, but we only chose models that use an HEPA (high-efficiency particle air) filter. It’s a fine mesh filter that traps unwanted particles to keep your air clean. These filters generally have to be changed every six months, but some advanced air purifiers have indicator lights that tell you when it’s time for them to be changed.

Loudness: Air Purifiers use fans to suck in air, which means they’ll make some noise when they’re working. All of our picks have multiple fan speeds (the faster the speed, the louder the noise), but we took this into consideration in case you’re planning on running your air purifier while you sleep. To keep things in perspective, a conversation from three feet away is 60 decibels loud according to the Occupational Safety and Health Administration, a division of the United States Department of Labor.

Ionization: This feature allows a purifier to charge air with electricity to attract particles down to .1 microns in size. Unfortunately this has two side effects: humans aren’t supposed to breathe ionized air, so it could irritate your lungs, and it puts off pollutants that damage the ozone layer. California banned air purifiers with ionization for this reason. Two of the options in this guide do support Ionization, but you have the ability to turn it on and off.

Note: the coronavirus outbreak has led to a number of people stocking up on air purifiers to keep their spaces safe. Keep in mind that while an air purifier can help filter out germs and clean the air, it won’t completely prevent the spread of viruses. You’ll still want to adhere to the Centers for Disease Control and Prevention’s tips for how to protect yourself.

In our book, Conway’s air purifier is the best air purifier for homes and it’s served me very well. Conway says its powerful filter works to filter out 99.97% of particles 0.3 microns in the air, including pollen, pollutants and other allergens. It’s also powerful enough to filter out heavy smoke too, with some reporting a “clean” room in as little as ten minutes.

Conway says its air purifier is designed for rooms up to 1256 square feet (for reference, bedrooms can be as small as 70 square feet), but I’ve used it in much larger spaces and still noticed a difference. Measuring 12 x 8 x 8 inches, the air purifier is small enough that I’ve been able to move it to different rooms — even up and down stairs — with no problem.

The purifier has five speeds: smart, sleep, low, medium and high, and its fan noise doesn’t go above 43.2db. I’ve been able to sleep while the purifier was on its highest setting, and can tune it out on its lowest one with no problem. Use the smart mode and put the air purifier to work, as it will automatically detect the air and lighting conditions in your room to adjust settings accordingly.

The power button turns it on and off while the speed button lets you switch between modes; the ionizer button enables its ionization mode. There is also a filter reset button that checks whether a filter needs to be changed, and the timer button lets you set the purifier to run for one, two, four, or eight hours. 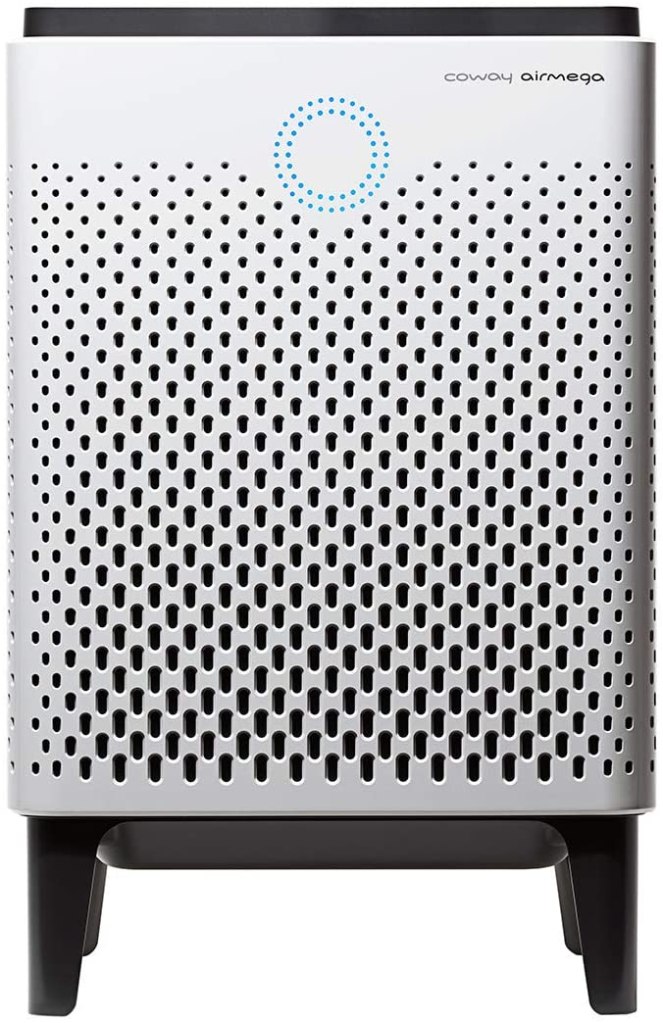 This is, by far, the most powerful air purifier on this list, so if you’re planning on using one in a large space, this is the right choice.

It can cover rooms up to 800 square feet, which the size of a big living room, small basement, or studio apartment. Medify says its four-layer H13 TRUE HEPA filter can help remove up to 99.9% of particles down to 0.1 microns. This medical-grade filter removes everything from smoke to pollen to dust mites.

The downside is that the MA-40 measures 22 x 9.9 inches, which is nearly a foot taller than the next biggest air purifier on this list. Its big size means you’re going to want to set it up in one room, and leave it there. It’s also the loudest option we recommend, with a peak volume of 60db, so you may not want it to run all the time.

Its buttons, located at the top, let you choose between four fan speeds, a one, two, four or eight-hour timer, and whether to enable ionization. There’s also a child lock feature, so your kid doesn’t mess with the settings.

If you want an air purifier for the biggest room in your house — or potentially your entire apartment — Medify’s MA-40 is your best bet. 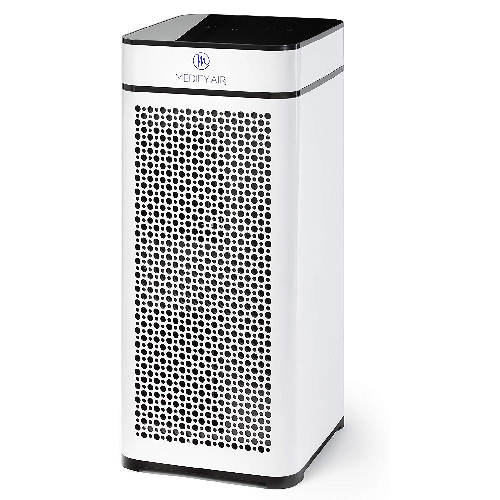 If you have a smaller room, and are willing to sacrifice a couple of extras for an air purifier that covers all the basics, LEVOIT’s LV-H132 is an excellent choice.

It’s 12.6 x 7.9 inches, and can cover rooms up to 129 square feet, which makes it an ideal choice for a bathroom or bedroom. Its small size comes with a big advantage: it only creates 25db of noise on its lowest setting. That’s less noise than a soft whisper from five feet away.

Despite its small size, this air purifier holds its own in most respects. It uses the same type of filter as higher-end models, and has three fan settings. It does not have an ionization function.

Its buttons, which are located on the top of the purifier, let you turn it on, change its fan speed, and check its filter. One nice touch: you can also adjust the brightness of its power light, so it won’t disturb you at night. 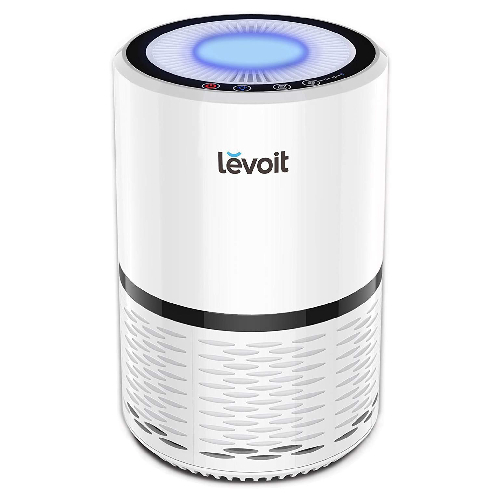 It’s easy to think about air purifiers as an appliance you can only use at home, but what about when you’re at work? This portable air purifier is great for a desk, side table or countertop.

KOIOS’ air purifier has a cylindrical shape, and is only 7.5 x 6.9 inches, so it looks and feels more like the Amazon Echo than a traditional air purifier. It’s 50db on its loudest setting, and only has a single button, which turns it on, and lets you cycle between its two fan speeds.

Its small shape and low volume makes this an air purifier you can keep at your work desk without bothering your coworkers. KOIOS doesn’t say anything about its air purifier’s coverage area, but that’s not going to be a huge deal if you use it at close range.

If you’re planning on using it at home, it’ll probably work best in rooms that are roughly 100 square feet. if your room is bigger, you should consider another option in our guide. 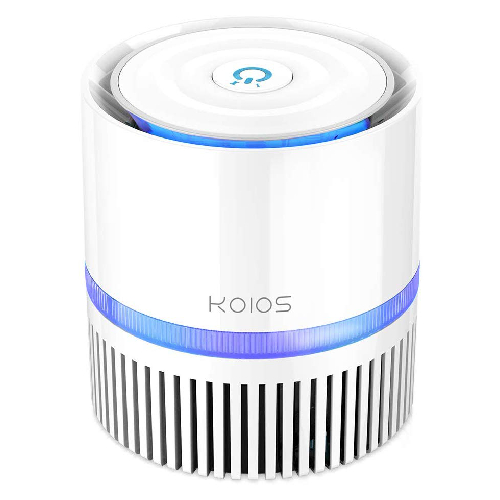 Celebrities With Acne Get Really, Really Honest About Their Skin…

Vicki Gunvalson Trashes Lisa Rinna: You Would Be NOTHING Without Me!

Jared Leto’s Oscar Has Been Missing for 3 Years