Home » The Reason People Are Calling Out Donald Trump, Jr.

While former President Donald Trump’s one-time confidante, recently de-licensed attorney Rudy Giuliani, might be having his own legal troubles and possible public embarrassments, it seems that in some ways, his former boss might be in the exact same boat. In July, Giuliani pulled down a donation page for a legal fund meant to help him in facing at least two lawsuits brought against him, totaling in the billions, both in reaction to Giuliani’s attempts to blame the plaintiffs, both voting machine manufacturers, for aiding in Giuliani’s unsubstantiated claims of election fraud in November 2020. And it seems that Trump, too, has an ongoing fundraising effort.

But considering Trump’s ban from almost every major social media platform, drumming up cash isn’t as easy as it might be for even Giuliani. Giuliani only managed to raise a little over $9,000 out of the desired goal of $5 million, which The Daily Beast speculated might have been the reason the page was taken down in July after only a few weeks since launching. But it appears Trump’s attempts to drum up cash, which have been overseen by his son, Donald Trump, Jr., might also not be great for the Trump family’s optics.

For an example of how Trump’s fundraising attempts have backfired, look no further than the response Don Jr. has since received since kickstarting the funding campaign, which Insider noted is supposedly intended to help his father with a few lawsuits of his own. 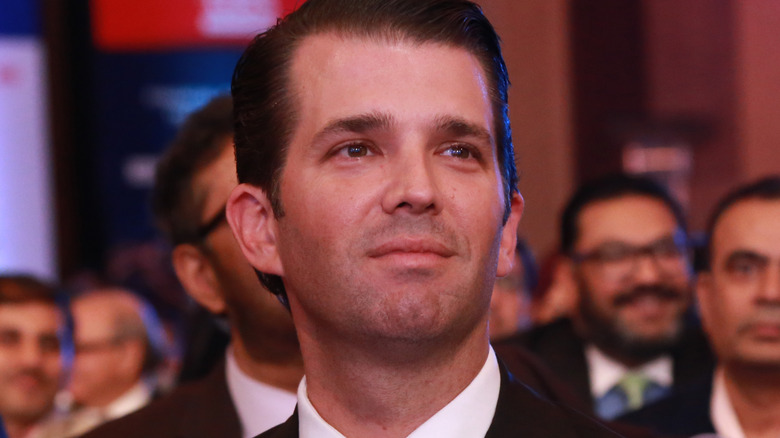 Even though Donald Trump, Jr. has been instrumental in fundraising for GOP candidates backed by both his father and the Trump family brood, it appears that his latest attempt to crowdfund has been less of a success. As Insider reported on July 9, an online campaign overseen by Don Jr., whose aim is to raise money to help his father with his class-action suits against the social media sites Twitter, Google, and Facebook over claims of censorship, was quickly cut short.

Per Insider, Don Jr. launched his crowdfunding bid on the social media platform Telegram (a messenger app mainly popular with conservative and far-right users, per NBC News), which included a link paired with a message from the Trump son. Though the post is no longer available, Insider included a screenshot of the deleted message. “Guys my dad is suing big tech!!!” Don Jr. initially wrote, adding “I’d [sic] you can click link to donate to his PAC to help out!!!”

Unfortunately for Don Jr., users didn’t take too kindly to the solicitation, instead questioning why a family who has previously boasted they are worth billions of dollars would need to crowdfund in the first place. “Is this a joke? Don’t the Trump’s have billions of $$$$?” commented one Telegram user, with another calling Don Jr. a “grifter” (via Insider). Per the outlet, donation suggestions spanned from $50 to $5,000.

Twilight zone beauty is in the eye of the beholder