A deadly drinks do in the desert: Wickedly dark and biting, The Forgiven is a cocktail of privilege and immorality – with a shattering Moroccan hangover, writes KATE MUIR

Do you like your humour wickedly dark, bordering on the unpleasant? Then The Forgiven could be the film for you.

Ralph Fiennes and Jessica Chastain star, and mine every line for satire, as a rich couple heading for a swanky party in a castle in Morocco.

Fiennes is David, a high-functioning, English alcoholic driving Jo, his American wife of 12 years, across the empty desert at night. Their relationship already seems bitter and twisted, and they’re arguing when a young man suddenly appears in their headlights and is killed on impact. 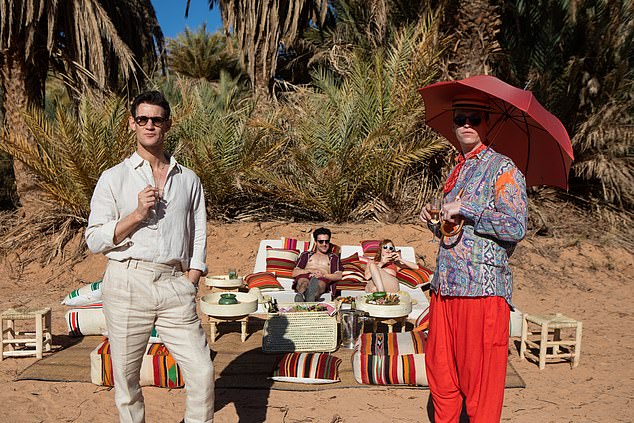 A killer party: Matt Smith (left) and Caleb Landry Jones star as the hosts in The Forgiven 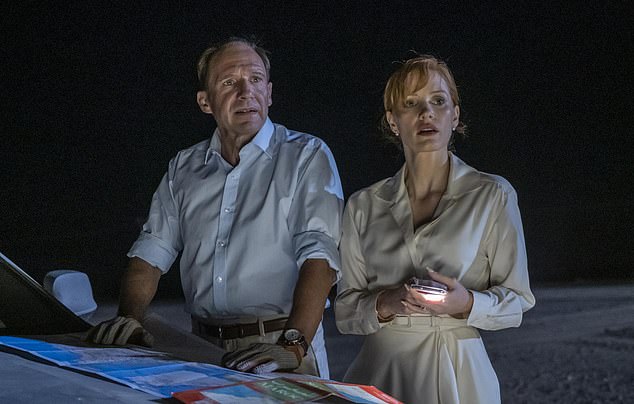 Ralph Fiennes and Jessica Chastain are their nightmare guests

Jo is distraught, but David immediately starts taking steps to avoid further blame. They arrive at the party, thrown by their dear friends (an outrageous gay couple played by Matt Smith and Caleb Landry Jones), and change into evening dress — leaving the corpse parked in the garage next to someone’s Porsche. The dead teenager, Driss (Omar Ghazaoui), from a Berber community, is forgotten amid the cocktails and cocaine.

This is just the start of the moral — or rather immoral — dilemma which pervades a picture peopled with shallow, privileged, hammered idiots who waver between ignorance and contempt for the Arab culture around them. Jo cheers herself up by flirting with one of the other guests, while David is sent out into the desert to do the honourable thing and meet the parents of the dead youth.

The Forgiven was created by John Michael McDonagh, the man behind the brilliant Irish films Calvary and The Guard. But the Berber element of the plot is clearly way out of his comfort zone. 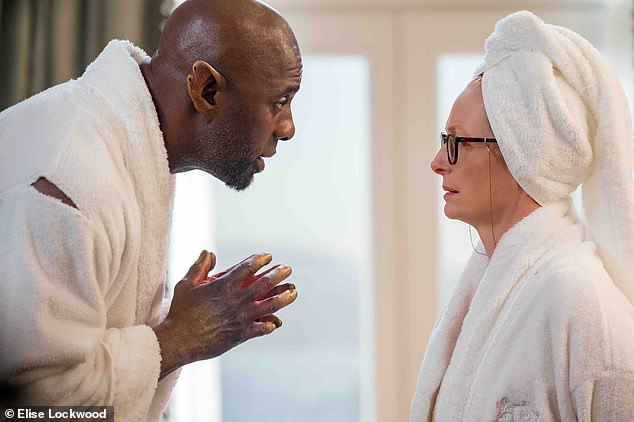 McDonagh does come up with some astonishingly weird touches. For instance, we discover that, at boarding school, David used to toss mice wearing tiny swastika-emblazoned parachutes off the roof as teachers walked below. The parachutes failed and the mice splatted, gaining an instant swastika shroud. Was he protesting about the school’s fascist leanings? Or was he just quite mad? It’s hard to know, but someone is going to get their comeuppance out in the desert, or as the Moroccan butler wryly notes: ‘Piece by piece the camel enters the couscous.’ Apart from the dead teenager’s family, it’s extremely hard to give a damn about anyone, but perhaps that’s the point.

Less a genie in a bottle, more a genie in a bathrobe: Three Thousand Years Of Longing stars Idris Elba as a creature who gets uncorked in Tilda Swinton’s hotel room. This is the opening of a fantasy film for adults, which just gets curiouser and curiouser.

Swinton brings healthy Northern scepticism to her part as Alithea Binnie, an academic at a narratology (or storytelling) conference in Istanbul, who gets caught up in the ultimate shaggy-dog story herself.

When Binnie goes souvenir shopping at the bazaar, she returns with a dirty blue-and- white glass bottle, which she attempts to clean with her electric toothbrush. Shazam! 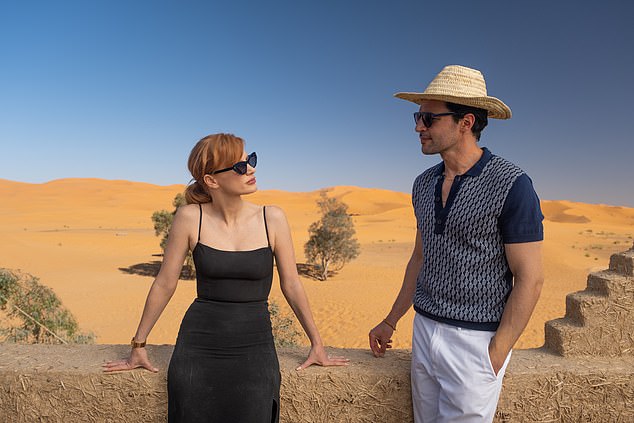 The Forgiven was created by John Michael McDonagh, the man behind the brilliant Irish films Calvary and The Guard. But the Berber element of the plot is clearly way out of his comfort zone 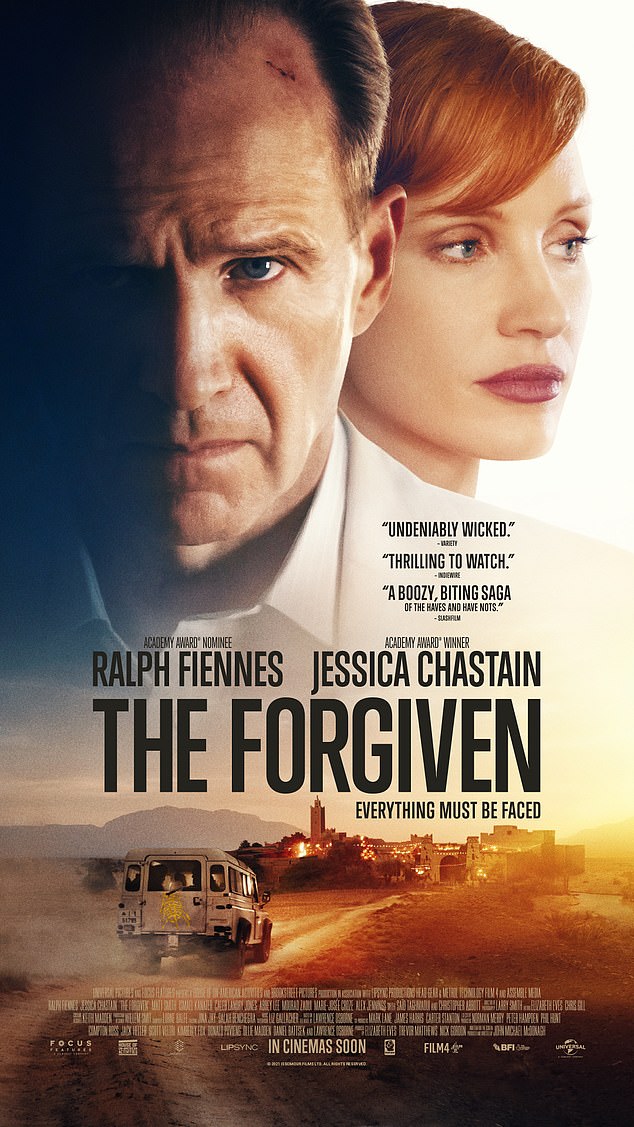 The film was based on A.S. Byatt’s short story The Djinn In The Nightingale’s Eye, and there’s a strong possibility it might not be about a genie at all, but the midlife fantasy of a lonely, fusty academic

A bit of smoke and mirrors later, and there’s Idris the Djinn, vast and topless in her bedroom. For modesty, his lower torso is covered in blue fish scales.

Ours is not to reason why, but to go along with three whopping stories the Djinn tells Binnie, as the two sit around in their white hotel bathrobes.

The Djinn hopes that she will make three wishes and free him on a permanent basis. Of course, Binnie is perfectly content with her life as a divorced bluestocking, and appears to have no needs beyond the intellectual …

The bonkers movie, directed by George Miller (of Mad Max fame), then romps off into glossy flashbacks from the Djinn’s long life. These include the moment when the Queen of Sheba callously dumped him for King Solomon, and his later struggles when a slave girl in the sumptuous court of the Ottoman Empire used her magical wishes to get pregnant by a prince.

‘There is no story about wishing that is not a cautionary tale,’ Alithea says tartly at one point, and the problem with this Byzantine package of whimsy is that it throws all possible spectacle on the screen, without truly engaging us in the characters.

The film was based on A.S. Byatt’s short story The Djinn In The Nightingale’s Eye, and there’s a strong possibility it might not be about a genie at all, but the midlife fantasy of a lonely, fusty academic.

Lincoln, or Link to his (few) friends, is an angry kid. And he has every right to be. His dad is a violent drunk, his mum is dead, and he lives in a rusty, musty corner of Canada.

Wildhood (15, 108 mins) starts with him bleaching his hair, like Eminem circa 1997. That’s how angry he is. But then Link learns that his Ma isn’t dead after all, so he sets off with his younger brother to find her — or, rather, himself. His journey of discovery involves both his Mi’kmaq tribal roots and the supple body of Pasmay, a brooding boy who accompanies them along the way.

Wildhood doesn’t avoid all the clichés of the coming-of-age drama. There’s a montage of Link, his brother and their buddy running through fields, set to bouncy music, for goodness’ sake. But the three central performances by Phillip Lewitski, Avery Winters-Anthony and Joshua Odjick, are — like the script and photography — so natural and understated that they elevate this one considerably. 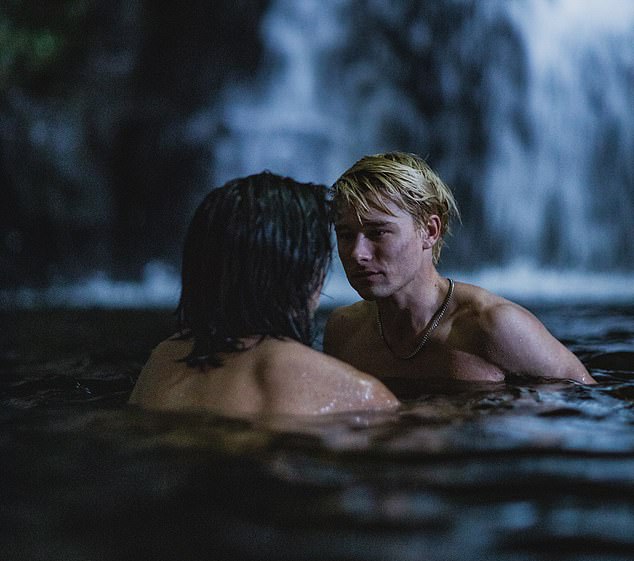 At a glance, The Territory (12A, 85 mins) is a very different film to Wildhood — it’s a documentary, for one, set in the Amazon rainforest. But similarities soon emerge. It, too, concerns an indigenous people whose position on this earth has been eroded by time and urbanisation. It, too, features a young kid, the 19-year-old Bitaté, who is finding his way in life. As the film starts, he’s leading his tribe against the encroachments of outsiders.

Aside from determined Bitaté, the most impressive quality of The Territory is its access-all-areas approach. Its heart is certainly with the Uru-eu-wau-wau. But it also spends time with the settlers and farmers who would claim these lands as their own. The result is something more than just another documentary about logging. It’s a war film, deep in the Amazon, complete with fire and murder.

Hats off to this exquisite portrait of 1950s England

The first couple of days of the 79th Venice Film Festival, which began here on the Venice Lido on Wednesday evening, have yielded some terrific films, though I sat through Living (12A, 102 mins) wondering what on earth a predominantly Italian audience would make of it.

Adapted from the 1952 Japanese film Ikiru, which was directed by the mighty Akira Kurosawa, it is set in post-war, ration-book England and tells the story of an ageing bureaucrat, Mr Williams (Bill Nighy), a dry-as-dust, bowler-hatted department head at the London County Council offices.

I’m guessing that synopsis has not got your pulse racing, and indeed the tale gets gloomier, because Mr Williams, a widower, is also dying of cancer: news that he keeps from his buttoned-up son and daughter-in-law, who live with him in Esher. 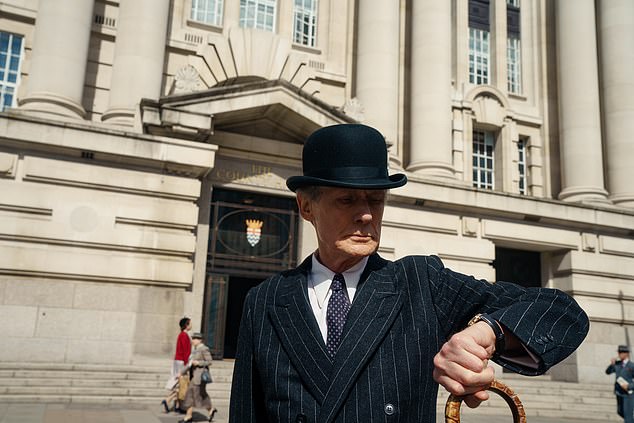 He does, however, share it with one of the underlings in his office, Miss Harris (Aimee Lou Wood), with whom he forms a sweet, entirely platonic friendship as he bids, in the months he has left, to add some belated colour to his miserably monochrome life.

It’s an exquisite film in its understated, melancholy way. Nighy — keeping all those fluttery mannerisms of his in check — is simply wonderful. And he gets first-rate support, in particular from the charming Wood.

I must tip my bowler, too, to director Oliver Hermanus, and screenwriter Kazuo Ishiguro, who depicts a certain brand of period Englishness as forensically as he does in his great novel The Remains Of The Day.

Living is not in competition here, more’s the pity, but of the films that are, TAR (12A, 158 mins, 4 stars), which had its world premiere last night, is a strong early contender for the festival’s prestigious Golden Lion award. 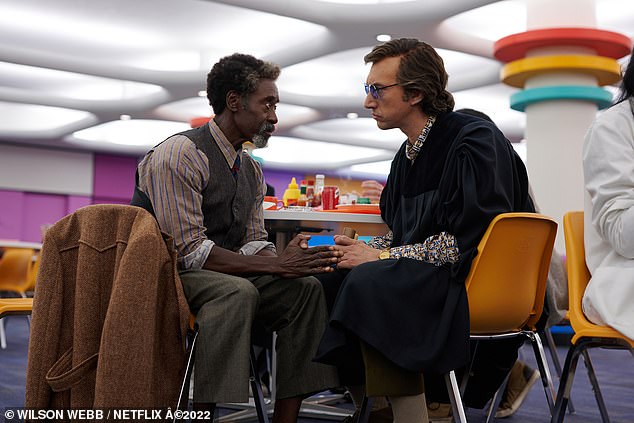 Written and directed by Todd Field (who’s made surprisingly few films since his acclaimed 2001 debut In The Bedroom), it stars Cate Blanchett, giving a suitably virtuoso performance as Lydia Tar, world-famous chief conductor of the Berlin Philharmonic Orchestra.

Lydia is American, a protégée of the late Leonard Bernstein, but is rooted in Berlin, where she lives with her female partner (the orchestra’s first violinist) and their child. Brilliant, hugely gifted, imperious and arrogant, she is feted the world over, and lives a gilded existence, until her own indiscretions and lesbian crushes begin to threaten it.

At more than two-and-a-half hours, TAR, like more than a few symphonies I’ve sat through, is at least 20 minutes too long. But Blanchett is superb.

Adam Driver and Greta Gerwig are excellent, too, in Noah Baumbach’s White Noise (No cert, 136 mins), which created a bit of history on Wednesday as the first Netflix film to open this venerable festival.

It’s an adaptation, set in 1984, of Don DeLillo’s satirical novel about Jack Gladney (Driver), a professor of Hitler Studies at a Midwestern university, his drug-dependent wife Babette (Gerwig) and their boisterous family, and how they and Jack’s academic colleagues (including Murray Siskind, splendidly played by Don Cheadle) deal with ‘an airborne toxic event’ created when a truck carrying dangerous chemicals crashes into a train.

There are a few genuinely funny scenes, but DeLillo’s novel was long thought ‘unfilmable’ and Baumbach, marvellous film-maker though he is, doesn’t entirely lay that notion to rest.

Despite the fine performances, there’s a self-conscious whimsicality throughout that gets a trifle wearing.

Here are the 25 hottest women in the world: Emma Watson…