Home » Celebrity » Scott Disick Spent New Years With Amelia Hamlin In Cabo – After Apparently NOT Being Invited To Her Family Christmas!

Well, in case you were worried, fear not! Scott Disick and his latest teen girlfriend Amelia Hamlin are still going strong!

The KUWTK star and the daughter of Real Housewives stars Lisa Rinna and Harry Hamlin were spotted together in Cabo San Lucas over New Years still looking very much like a couple.

In photos that can be seen on DailyMail.com, they held hands as they soaked up the sun on the beach, the deck chairs around them filled with friends — none of whom were wearing a mask. It’s almost like the pandemic doesn’t exist for these people! (Side note: the staff of the cabana they were lounging at were clearly all still wearing their masks. Just trying to stay safe from all these rich people.)

Anyway, back to the couple!

Lots of reasons for a couple to visit Cabo for a vacay. The sun, the beaches… Oh, and notably, the legal drinking age is only 18. Meaning it’s perfectly legal to get your 19-year-old significant other all liquored up. And Amelia was seen drinking a margarita.

While the festivities may be over, it seems Amelia can’t stop thinking about her 37-year-old zaddy. She posted a pic she clearly took during the vacation (she’s wearing the same black bikini and bandana, and the stone wall is a total cabana match) to her Instagram on Monday January 3rd, captioning the thirst trap:

We think we might have an idea who the “u” in this context refers to. And it ain’t that white Cabo sand. 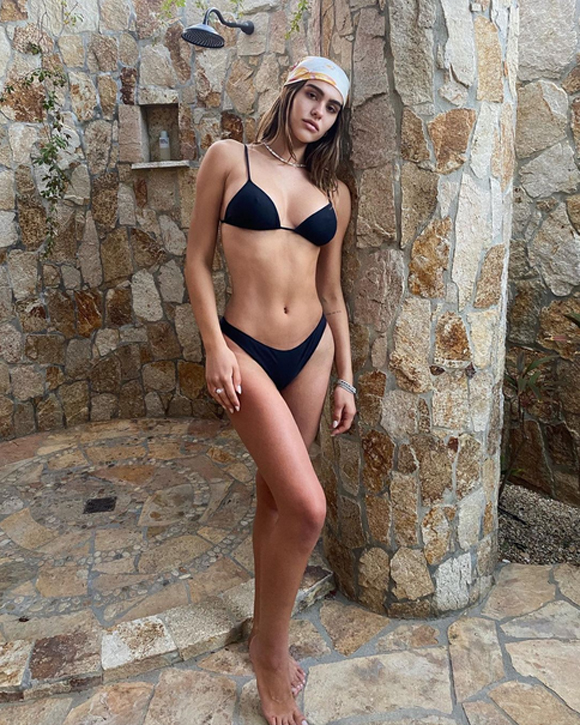 Clearly Amelia Gray is still brushing off any controversy over the May-December romance (or Early March-December in this case). She recently spoke out about criticism, seemingly over her relationship with Scott though she kept that part as subtext, writing on IG:

“ppl r extra weird and judgmental these days… people can embrace themselves however they feel fit for them at that moment in time. people grow. people learn to love themselves more and more.”

An insider dished to E! News back in November, just a few weeks after Scott and Amelia started dating publicly at a Halloween bash, that Harry Hamlin and Lisa Rinna were much more into their daughter’s previous (age-appropriate) boyfriend, Mercer Wiederhorn, the son of Fatburger‘s CEO:

“Harry and Lisa were sad to see Amelia and Mercer Wiederhorn split because they loved Mercer. He was like family, but they understand … , they believe this is just a phase.”

Later, another source told The Sun Lisa was straight up “worried” about Amelia’s relationship and dealing with the “baggage” dating a grown man and father-of-three brings. That insider spilled:

“That’s her youngest kid. She really does like Scott but both her and Harry don’t want someone that age with so much baggage to be with their baby girl, especially given Amelia’s own mental health issues.”

We guess the strained relationship between the parents and Scott was shown in the fact he wasn’t around for their Christmas celebrations — while her sister Delilah Belle‘s beau was.

What do YOU think about this relationship? Will it last? Will Scott move on again? Let us know in the comments (below)!

The Part Of Meghan Markle’s Interview That Made Oprah Furious