Royal life can seem like both a spectacle and a fairytale. In some regards, it’s proof that the tales in Disney films can be true, if only for a select few. Just look at Meghan Markle’s veritable Cinderella story (if Cinderella was a Hollywood actress with a multi-million dollar net worth). It also looks quite lonely behind the scenes, at least if you’ve watched the recent season of Netflix’s “The Crown,” but the truth is that nobody knows what royal life is really like until they find themselves living it.

This is the recipe behind Stewart Pearce’s new book, “Diana the Voice of Change.” As the Princess of Wales’ former vocal coach, Pearce pulls back the curtain on Princess Diana’s life behind the palace gates and the journey she took to become the woman everyone saw in the tabloids. As it turns out, that’s something the vocal coach is deeply acquainted with because working with royalty runs in his family.

Pearce grew up in close proximity to the British royals. His father worked for Prince Philip, and as he tells Nicki Swift, the pair were “very, very close.” It’s not every day that your close family friend and employer lives in Buckingham Palace, but to Pearce, that was just his normal childhood. In his mind, the only “unusual” thing was the “level of privilege being a royal servant.”

So what’s growing up two degrees from the queen really like? According to Pearce, it was “extraordinary.”

Pearce spent his childhood 'in awe' of the monarchy 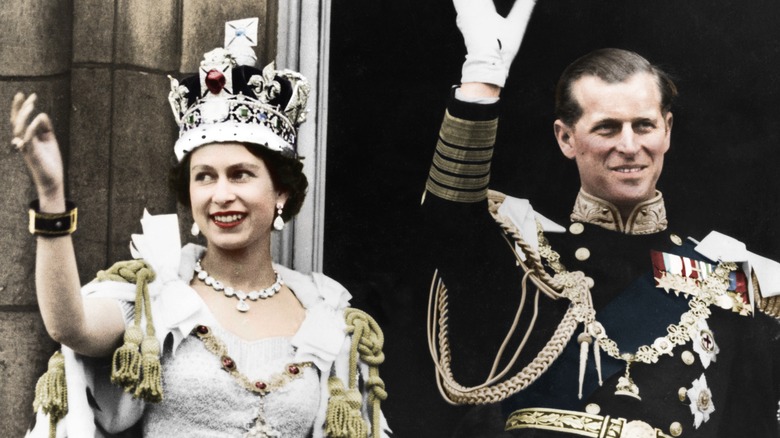 Pearce’s father ended up forging a close bond with Prince Philip, who married Queen Elizabeth II in 1947, when the pair served in the Royal Navy during World War II. As Pearce admits, it was still the “age of innocence.” Back in the ’50s and ’60s, royals didn’t have the same security concerns that pushed Prince Harry and Meghan Markle to leave their royal roles. “We didn’t have these things to take selfies with,” he says, lifting his phone up to the camera during our late afternoon Zoom call.

Instead, what Pearce saw as a child in the newsreels was a “sort of fairy tale beauty” that permeated around the young queen and Duke of Edinburgh. It wasn’t rough around the edges like what’s in modern tabloids, and his father would pass down fanciful tales as if it were folklore.

“My father would go away sometimes for six weeks or two months with him, and then he would come back and talk about climbing Machu Picchu and being in Acapulco and then a tiger shoot in India,” he tells Nicki Swift. “And all of this was huge romance for [us] kids. I was really steeped in it.”

Pearce credits his mother, a “very earthed individual,” for keeping him and his brother grounded by giving them real-world experience. Nonetheless, he admits, “I was in awe and in wonder of the majesty and the heritage of the tradition of what monarchy is all about, which of course has changed radically.”

Pearce’s book, “Diana the Voice of Change” is available now via Amazon or bookstores everywhere.

Before and after pictures of celebrities

'The Pioneer Woman': Ree Drummond Says Her Easy Key Lime Pie Has to be Part of Your 4th of July Menu