Prince Harry is looking media bullies and online trolls straight in the eyes. During a November 9 panel for WIRED magazine, the Duke of Sussex spoke out against online and media hatred, as well as British tabloid journalists who “amplify” false conspiracy theories and hateful rhetoric.

“Maybe people know this and maybe they don’t, but the term Megxit was or is a misogynistic term, and it was created by a troll, amplified by royal correspondents, and it grew and grew and grew into mainstream media. But it began with a troll,” said Harry, who is currently in New York for a ceremony to honor war heroes.

The duke’s conversation was part of a RE:WIRED event panel titled The Internet Lie Machine, which focused on the impact that online falsehoods have on communities, democracies, and the world.

Calling misinformation a “global humanitarian crisis,” Harry shared his own personal experience with sensationalism and media shock tactics, issues that are now a problem both online and off. “I felt it personally over the years, and I’m now watching it happen globally affecting everyone, not just America, literally everyone around the world. I learned from a very early age that the incentives of publishing are not necessarily aligned with the incentives of the truth,” said Harry, who lost his mother, Princess Diana, to an August 1997 car crash after being chased by paparazzi in Paris. “I know the story all too well. I lost my mother to this self-manufactured rabidness, and obviously I’m determined not to lose the mother to my children to the same thing.”

“Misinformation is a global humanitarian crisis”

Highlights from Prince Harry’s #REWIRED2021 session, where he spoke about working with @AspenInstitute, warning @Jack about a “coup” the day before the Capitol riot, and the journalists who repeat harmful lies invented by trolls. pic.twitter.com/t728fK6Us5

Speaking to WIRED editor-at-large Steven Levy, the prince continued, “The scale of misinformation now is terrifying. No one’s safe from it, no one is protected from it. You can’t hide from it, and we continue to see lives ruined and families destroyed in one single household.”

Rashad Robinson, president of Color of Change, and Renée DiResta, technical research manager at the Stanford Internet Observatory, also took part in the conversation. They have both gotten to know the prince well through his efforts in this field. Robinson and Harry are currently serving on the Aspen Institute Commission on Information Disorder, which will soon reveal the results of six-month study exploring misinformation in the United States and presenting a “solution-orientated approach to the information disorder crisis.”

In October, a social media analytics service called Bot Sentinel identified 83 accounts on Twitter that were responsible for around 70 percent of the hateful content and misinformation on the platform aimed at the Sussexes.

Referring to the study, Harry added that “perhaps the most disturbing part of this was the number of British journalists who were interacting with them and amplifying the lies. But they regurgitate these lies as truth.”

Earlier in the day, new Bot Sentinal research highlighted the interactions of a group of journalists—including royal biographer Angela Levin and self-proclaimed royal expert Richard Fitzwilliams—and hate accounts targeting Harry and Meghan. In the case of Levin, false claims invented by Twitter users had even become part of the author’s television commentary about the duke and duchess. 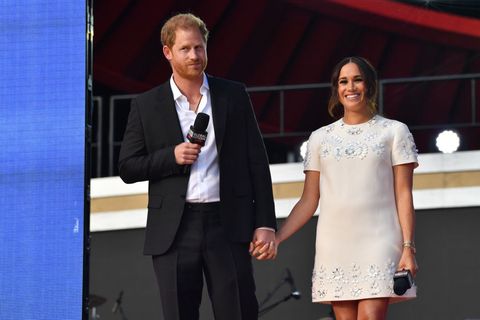 “This isn’t just a social media problem. It’s a media problem,” Harry added. “I’ve grown up learning that news should be sacred ground. You don’t have to be Logan Roy [the fictional media mogul at the center of TV drama Succession] or Rupert Murdoch to understand that clickbait is the descendant of targeted advertising.”

Harry went on to discuss social media’s role in the January 6 Capitol riots, recalling an email he had sent to Twitter CEO Jack Dorsey the day before the attacks. “Jack and I were emailing each other prior to January 6. I warned him that his platform was allowing a coup to be staged,” he said. “That email was sent the day before and then it happened and I haven’t heard from him since.”

The fight against misinformation and media corruption is one of the many issues Harry has focused on since cofounding the Archewell Foundation with the Duchess of Sussex, who just earlier in the day said tabloids should come with “a warning label like cigarettes.” Harry explained, “People now more than ever want and need truth. They want and need trust, and they want and need transparency. We’re here to support them in any way possible.”

But, despite the issues, Harry is hopeful that change is possible. “Real journalists have the power and the will to tackle racism, misogyny, lies, all of it from within their own systems,” he said.

Celebrities that live in oregon