Prince Edward is reflecting on the legacy of his late father, Prince Philip.

The Duke of Edinburgh died Friday at age 99 after 73 years of marriage to Queen Elizabeth II.

Edward, the Earl of Wessex, is the youngest of Queen Elizabeth and Philip’s four children. The British royal family member reacted on Thursday to touching memories that were shared by members of the youth who were impacted by Philip’s charity organization, known as the Duke of Edinburgh’s Award. It was founded in 1956 and its goal is to “help young people gain essential skills, experience, confidence and resilience.”

“Reading just some of the wonderful memories you have shared about your experiences of the Duke of Edinburgh’s Award and, in some cases, of meeting my father, has been truly uplifting. I think I may have said once that he was a man that once met, never forgotten. He had a unique ability to make a lasting impression in a remarkably short time,” Edward said in a statement.

The Duke of Edinburgh’s Award now operates in 140 countries.

Edward went on to say he and the rest of his family has a “lifetime of lasting impressions, inspiration, shared passions and love” of his father.

“He may have departed this world, but his spirit and ethos lives on through his Award, through each and every life touched, transformed, inspired; then, now and in the future. Thank you one and all for helping to create such an extraordinary tribute,” Edward concluded.

Edward’s words come just days after he and his sister, Princess Anne, paid tribute to their late father on camera. 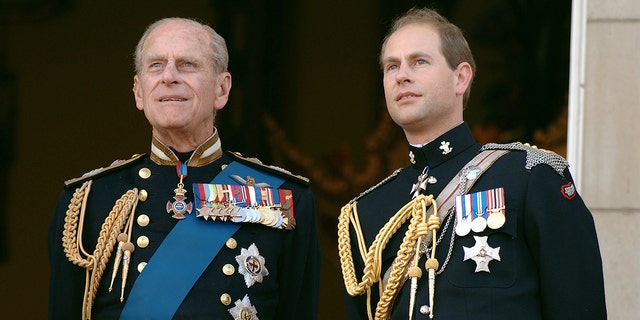 Prince Edward, Earl of Wessex and Prince Philp, Duke of Edinburgh, watch the flypast over the Mall of British and US World War II aircraft from the balcony of Buckingham Palace on National Commemoration Day, July 10, 2005, in London, England. Philip died on April 9 at the age of 99, Buckingham Palace said.
(Anwar Hussein/Getty Images)

“Without him [life] will be completely different,” Anne said. “But, I think also, from the society’s perspective he’s been able to keep pace with the kind of technological changes that have such an impact.”

She added: “But at the bottom of all that, it’s not about the technology it’s about the people.”

In addition to Edward and Anne, Elizabeth and Philip are also the parents of Prince Charles and Prince Andrew.

Over the weekend, the Earl of Wessex said his father was “always there,” and described him as “encouraging” and “never pushing.”

You might assume that celebrities are the first on the …

The Biggest Scandals In America’s Next Top Model History