For Aidan Turner, it seems that old habits die hard.

The 39-year-old won legions of female admirers after showing off his toned physique during shirtless scenes in BBC drama Poldark.

Pictured in East London last week, he flashed a glimpse of midriff during a stroll in the sunshine with his actress wife Caitlin FitzGerald – who was pushing a pram. 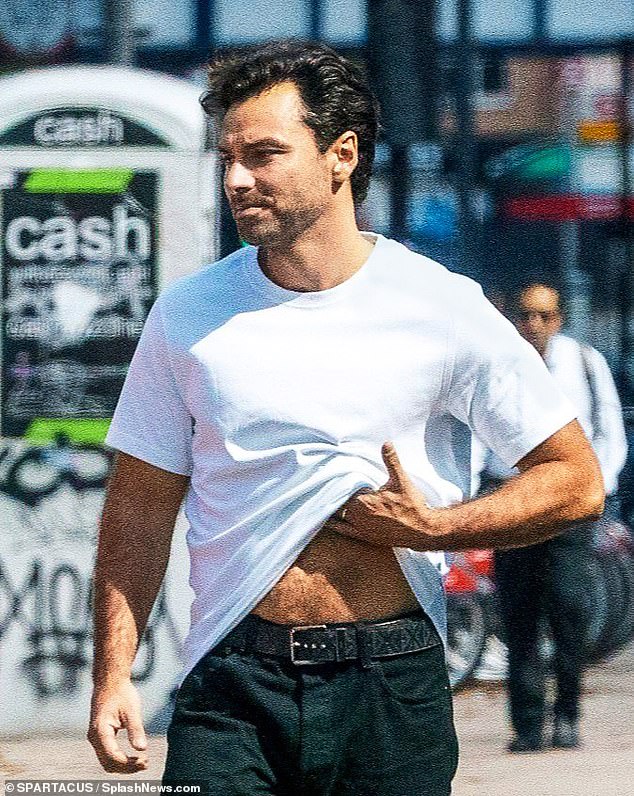 Pictured in East London last week, Aidan Turner flashed a glimpse of midriff during a stroll in the sunshine

The couple, who married in a low-key ceremony in Italy in August 2020, reportedly welcomed their first child into the world in January, although they have not publicly confirmed they are parents.

Speaking about the Poldark role in the current edition of Radio Times, Turner insisted he didn’t feel ‘objectified’ by the attention he received and spoke of working out at the gym beforehand.

He said: ‘I figured in my preparation that, given Ross Poldark was a very active guy, and the sort of diet he’d be on, it just felt right to get into that.

‘He’s a farmer, he working, he’s riding a horse all the time, he’s a soldier. So it made sense to be in shape, but it wasn’t something I focused on.’

Now clean-shaven again, the Dublin-born actor appears with a full beard in his latest role as a criminal psychologist and author in the five-part ITV thriller The Suspect, which begins tomorrow night. He is also due to appear in The Way Of The Wind, a big-screen biblical drama, alongside Mark Rylance, Sir Ben Kingsley and Joseph Fiennes.

Miss FitzGerald, an American, celebrated her 39th birthday on Thursday. Her screen credits include Masters Of Sex, the acclaimed TV drama series.