Paris Hilton is riding on the #FreeBritney hype train despite pop star Britney Spears admitting openly in court during her conservatorship hearing that she didn’t entirely believe Hilton’s recent accounts of what the reality star allegedly experienced during Hilton’s time at the Provo Boarding School in Utah.

Hilton, 40, made her stance known on Thursday night during her DJ set at the grand opening of Sin City’s newest strip casino and hotel, the Resorts World Las Vegas.

According to TMZ, the socialite took fashion cues from Spears’ 2003 outfit she wore in the “Toxic” music video for her appearance.

The look apparently inspired Hilton to declare in a social media video captured by an onlooker, “We love you, Britney. Free Britney.” 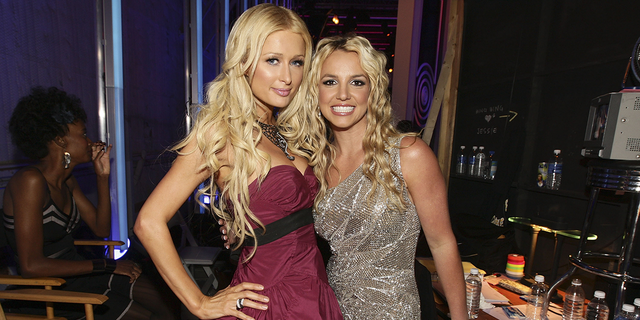 Paris Hilton and Britney Spears at the 2008 MTV Video Music Awards. Hilton has spoken out in support of Spears amid her ongoing conservatorship.

The media personality and great-granddaughter of Conrad Hilton, the founder of Hilton Hotels, has long positioned herself firmly in Spears’ corner since their days running the mean streets of Los Angeles as the “Holy Trinity” alongside gal pal Lindsay Lohan, 34.

The infamous 2006 paparazzi snap of the trio through the windshield of Hilton’s ride still lives on as one of pop culture’s most memorable moments as all three were at the pinnacle of their respective successes.

Hilton even paid tribute to the moment back in 2017.

“11 years anniversary today since the first coming of The Holy Trinity!” Hilton tweeted in November of that year and included frame-by-frame snapshots of the triplets moving about as a unit.

Just last year, she also leaned into her support for Spears during a SiriusXM interview with Andy Cohen.

“I just love her so much,” she said of Spears. “I feel like if you are an adult, you should be able to live your life and not be controlled.”

Days ago – The latest news on British Celebrities is on POPSUGAR …