A TikTok video has gone viral of the moment Holly Willougby, 41, and Phillip Schofield, 60, were seen being led past the regular queue of mourners to see the Queen’s coffin at Westminster Hall last week. The presenters were filmed walking behind This Morning boss Martin Frizell and other members of the crew in a closed off area.

In the clip, Holly was seen wearing a black dress with a mask over her face.

Phillip, amongst his fellow male colleagues, opted for a smart black suit.

The moment caused many to slam the pair on social media after they appeared to be queue jumping.

After a lot of backlash, This Morning were forced to step in and comment. 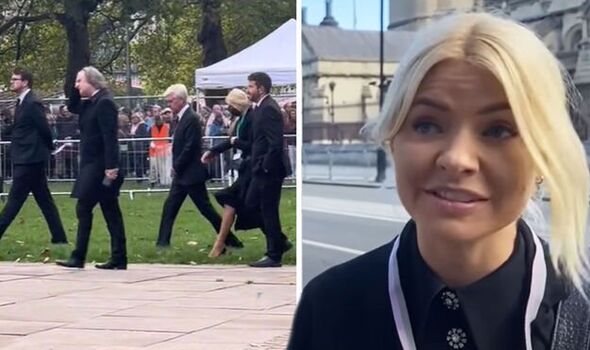 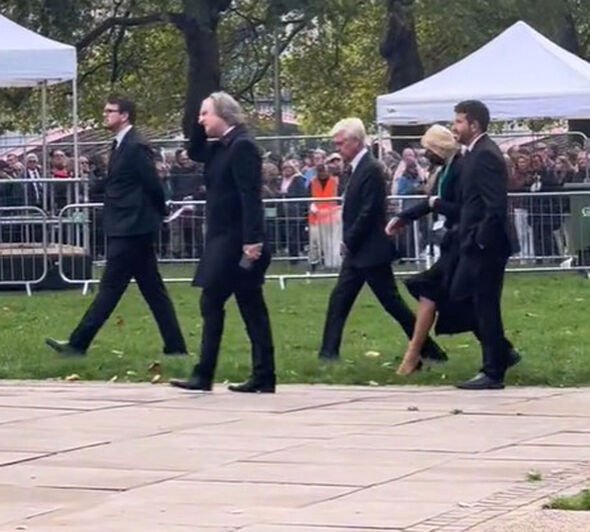 They said in a statement: “Hello everyone, we would like to clarify something.

“We asked Phillip and Holly to be a part of a film for this Tuesday’s programme.

“They did not jump the queue, have VIP access or file past the Queen lying in state, but instead, were there in a professional capacity as part of the world’s media to report on the event.”

The presenting duo also issued a comment during a segment about the late monarch’s funeral on Tuesday’s show. 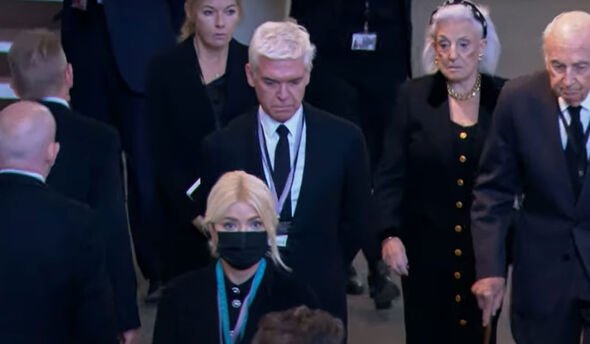 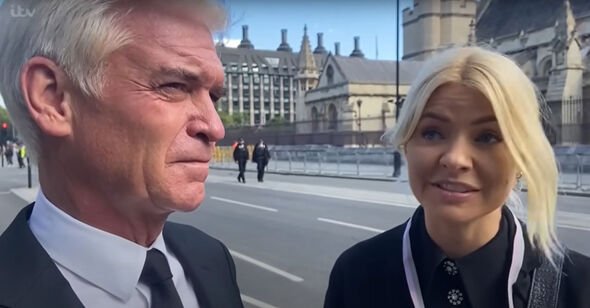 Holly said in the VT: “Like hundreds of accredited broadcasters and journalists, we were given official permission to access the hall.

“It was strictly for the purpose of reporting on the event for millions of people in the UK, who haven’t been able to visit Westminster in person.

“The rules were that we would be quickly escorted around the edges to a platform at the back, in contrast, those paying respect walked along a carpeted area besides the coffin and were given time to pause.”

She went on to say that no broadcasters or journalists took anyone’s place in the queue and “no one filed past the Queen”.

Holly added that she and Phil respected the rules but realised it may have looked like something else.

“[We] totally understand the reaction,” she continued. “Please know that we would never jump a queue.”

Ahead of the statements being issued, many criticised the pair especially after the likes of David Beckham and Susanna Reid were seen in the regular queue.

The ex footballer queued for almost 13 hours in the line with fellow mourners and was seen wiping away tears when he finally got to the coffin.

Susanna addressed queueing with her mum for up to seven hours on Good Morning Britain yesterday.

After Mel B asked how it was, she said it was “a pilgrimage.”

The Spice Girl laughed as she went on to say: “No queue jumping for you!”

Susanna replied: “Well, some people had to work, of course. I was there with my mum who wanted to be there and her friend and it was lovely.”

In stockA variety of Calathea ornata, the Calathea Beauty Star has elegantly …