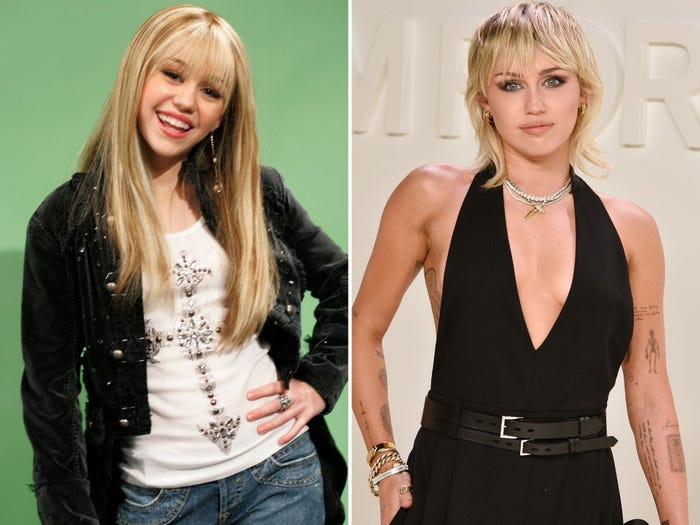 In late November, Miley Cyrus delighted fans by dropping her seventh studio album, "Plastic Hearts," which is full of rock- and punk-influenced songs.

In light of her new album, Cyrus recently opened up to Rolling Stone's Brittany Spanos as the magazine's January cover star about the inspiration behind "Plastic Hearts" and her evolution leading up to her latest musical release. She also addressed her rise to childhood fame playing the lead character on "Hannah Montana," which aired on Disney Channel from 2006 to 2011.

When Spanos asked Cyrus if it was difficult to grow into her own musical star separate from the TV show, Cyrus said the pressure of the television series forced her to "evolve."

"I had to evolve because Hannah was larger than life, larger than me," Cyrus said. "I felt like I was never going to amount to the success of Hannah Montana."

Despite the challenge of comparing herself to the fictional Hannah Montana pop star, Cyrus said that the role was 'not a character' to her

Cyrus said that despite playing the fictional role of Hannah Montana, the persona was really "not a character" to her because she feels her early performances — on the show and beyond — made a positive impact on viewers and fans.

She went on to speak about how her childhood performances seemed to inspire other musicians who have found success in recent years, including Lil Nas X (who collaborated with Cyrus' dad, Billy Ray Cyrus, on "Old Town Road.") Lil Nas X has referenced watching "Hannah Montana" as a career-inspiring turning point, as the rapper knew of Billy Ray Cyrus' music from the show.

"That's how Lil Nas X actually knew of my dad," Cyrus said of her Disney Channel show. "He grew up watching 'Hannah Montana' and said, 'I want to do a song with Robby Ray.' That's literally what happened. Being a young queer kid's idol that could turn out to be a Lil Nas X and create a whole identity for themselves off being inspired from watching me growing up."

Cyrus added, referencing her song that she released in 2010: "Or I hear artists like Troye Sivan say he felt more comfortable with his sexuality when I came out with 'My Heart Beats for Love.'"

In regard to portraying a character on the Disney Channel show who doubled as a pop star, Cyrus told Spanos that she relates to the fictional character and concept of "Hannah Montana."

"When my peers are having these experiences and accepting themselves because of something that I demonstrated while they were a kid, that's when I go, 'S—, I f—— am Hannah Montana,'" Cyrus told Rolling Stone. "Really, Hannah Montana was not a character. That wasn't what the show is about. It was about a normal girl with a f—— wig on. Everything was always in me. The concept of the show, it's me."

Cyrus added: "I've had to really come to terms with that and not be third-person about it."

Along with her musical evolution, Cyrus also spoke to Rolling Stone about her sobriety, her marriage to her now-ex-husband Liam Hemsworth, and what she wants her legacy to be as an artist.

"I'd like to be known as someone that created something that didn't quite exist, or that I delivered something that no one knew that they needed or wanted, but when they had it felt that they couldn't live without it," Cyrus said.

Candle in beauty and the beast