Michael B. Jordan is apologizing after facing backlash and allegations of cultural appropriation over the name of his new rum label. The Creed star took to his Instagram Story on Tuesday to assure fans he’s heard their concerns and is “in the process of renaming” the rum.

The movie star and alcohol entrepreneur drew heat over the weekend when it came out that he filed to trademark the word “J’Ouvert” for his new brand of high-end alcohol.

The term — which is deeply rooted in Caribbean and Trinbagonian culture — marks the start of Carnival, and is derived from the French words “jour ouvert,” meaning day break, the break of dawn, or simply morning.

Jordan was first criticized for trying to trademark the term at all, given its widespread and already existing use among many different groups and traditions. Additionally, fans took offense to one line in the trademark filing which claimed the word “J’Ouvert” has “no meaning in any language.”

A Change.org petition was quickly formed to try and have the filing dismissed. The petition appeared largely to be a way to call Jordan’s attention to the outcry and to encourage him to change direction.

On Tuesday, Nicki Minaj weighed in, sharing a history lesson about the term and significance of “J’Ouvert” — written by another social media user who laid out the roots of the terminology and its importance — and called on Jordan to reconsider the name.

“I’m sure MBJ didn’t intentionally do anything he thought Caribbean ppl would find offensive — but now that you are aware, change the name & continue to flourish & prosper,” Minaj wrote.

Later in the evening, Jordan responded formally to the backlash, writing, “I just wanna say on behalf of myself & my partners, our intention was never to offend or hurt a culture (we love & respect) & hoped to celebrate and shine a positive light on.”

“Last few days has been a lot of learning & engaging in countless community conversations,” he continued. “We hear you. I hear you & want to be clear that we are in the process of renaming.”

“We sincerely apologize & look forward to introducing a brand we can all be proud of,” he concluded. 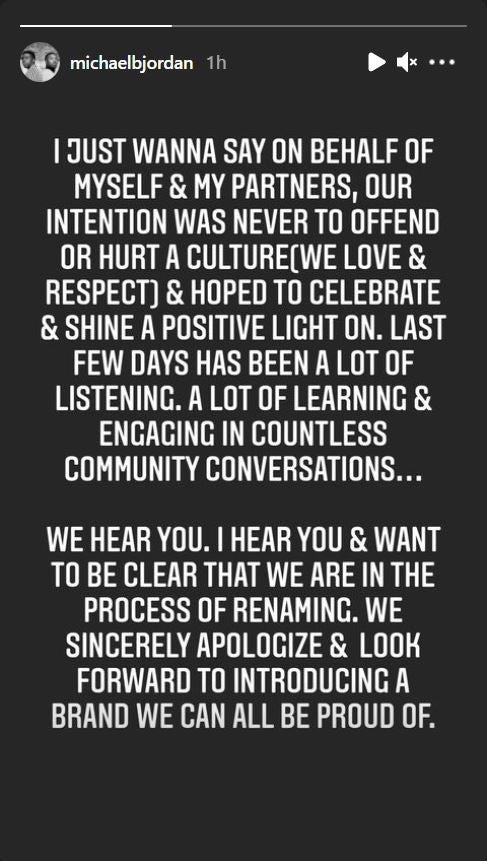