After McKayla Maroney demanded justice over the botched Larry Nassar investigation, she gave love to her friends and fellow victims who also testified.

A picture is worth a thousand words, so McKayla Maroney didn’t have to say much more than what she posted on Wednesday evening. Hours after McKayla, 25, testified about the FBI’s mishandling the Larry Nassar sexual abuse investigation, she posted photos of her alongside the other three women who spoke in front of Congress: Simone Biles, Aly Raisman, and Maggie Nichols. The photos showed Simone, 24, Aly, 27, Maggie, 24, and McKayla sitting in front of a roaring fireplace, enjoying a moment of sisterhood together. McKayla captioned the post with a black heart emoji, a bit of love for these women after the hard day they endured.

Earlier in the day (Sept. 15), the four gymnasts spoke at a Senate Judiciary Committee hearing regarding the Justice Department and FBI’s investigation into the abuse allegations made against Larry Nassar. McKayla accused “USA Gymnastics in concert with the FBI and the Olympic committee” of “working together to conceal that Larry Nassar was a predator.” McKayla testified that after telling her story of abuse to the FBI in 2015, the agency not only didn’t report her abuse but “when they eventually documented my report, 17 months later, they made entirely false claims about what I said.”

“This was very clear, cookie-cutter pedophilia and abuse, and this is important because I told the FBI all of this, and they chose to falsify my report and to not only minimize my abuse but silence me yet again,” she said. “They had legal, legitimate evidence of child abuse and did nothing. If they’re not going to protect me, I want to know who are they trying to protect.” 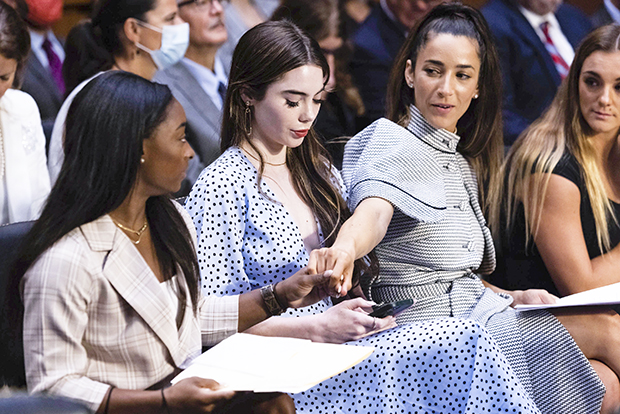 “I sit before you today to raise my voice so that no little girl must endure what I, the athletes at this table, and the countless others who needlessly suffered under Nassar’s guise of medical treatment, which we continue to endure today,” said Simone, during her tearful and emotional testimony. “Nassar is where he belongs, but those who enabled him deserve to be held accountable. If they are not, I am convinced that this will continue to happen to others -across Olympic Sports. In reviewing the OIG’s Report, it truly feels like the FBI turned a blind eye to us and went out of its way to help protect USAG and the USOPC. A message needs to be sent: If you allow a predator to harm children, the consequences will be swift and severe. Enough is enough.” 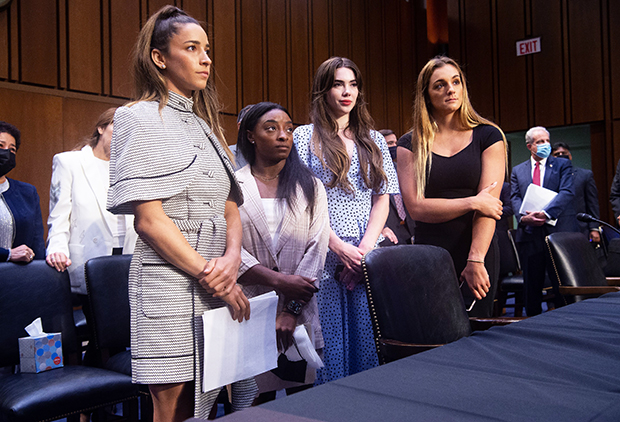 Nassar pleaded guilty in 2018 to seven counts of criminal sexual conduct. In January of that year, he was sentenced to 40 to 175 years in prison after more than 150 women, and girls said in court that he sexually abused them. The following February, he was sentenced to an additional 40 to 125 years after pleading guilty to an additional three counts of sexual assault.