Home » Celebrity » Madonna, 64, shares rare photo with all six of her children 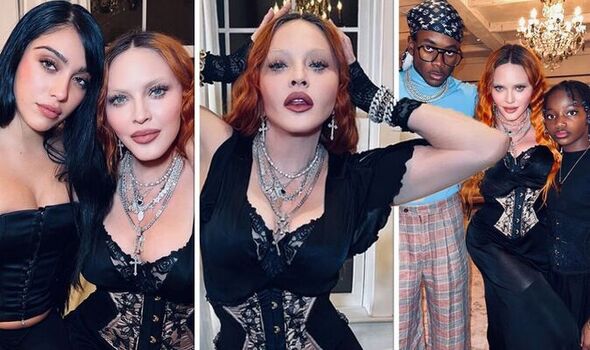 Madonna took to Instagram on Friday and shared a series of sweet photos of her family despite it proving notoriously difficult to get them all together at the same time.

The singer donned a fitted black dress that featured a lace bustier giving a glimpse of her cleavage as she layered her neck with an array of silver jewellery.

Madonna told her 18.6 million followers: “What I’m thankful for…”

The legendary performer was inundated with messages from fans who gushed over the photos.

Arto penned: “The children have grown so beautifully! You’re an awesome mum! We can see it in your kids!”

Joseph commented: “Family is what it’s all about.”

Missus added: “What a beautiful mum and family.”

Madonna shared a rare photo with all of her children

Lourdes Leon is Madonna’s eldest child, who has forged a career for herself in her own right. She is a fashion model and singer-songwriter. She is also the daughter of Carlos Leon, a fitness trainer.

Madonna adopted her son David from an orphanage in Malawi in 2005. Speaking of the pair’s relationship, she told British Vogue: “He’s] the one I have the most in common with. I feel like he gets me; he has more of my DNA than any of my children so far.”

Twins Stella and Estere were born in Malawi on Aug. 24, 2012. Madonna adopted her youngest daughters when they were 5 in February 2017.

“It’s like they were always here,” the Swept Away star told PEOPLE. “It didn’t take long for them to get acclimated.”

Madonna appeared to be in high spirits during Thanksgiving

Madonna has previously shared the twins have discovered their passion and talents. She has shown off Stella’s piano skills; both girls are talented dancers like their older brother, David.

Madonna was also joined by her son Rocco, 22, her second child, who she shares with ex-husband and British film director Guy Ritchie.

Madonna enjoyed a beverage during Thanksgiving

Madonna adopted her daughter Mercy, 19, in 2009 and opened the Mercy James Institute for Pediatric Surgery and Intensive Care in Malawi in 2017.