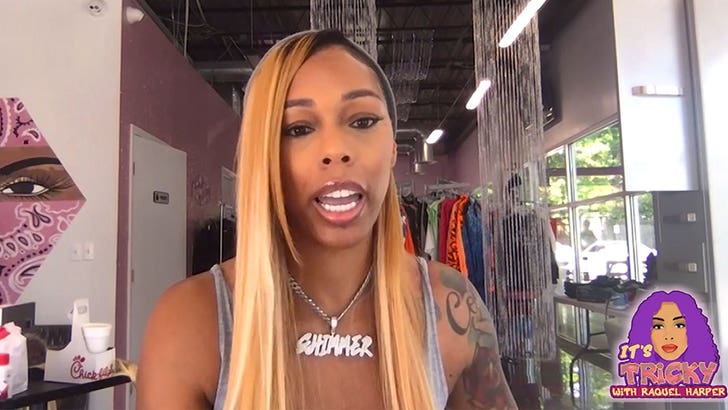 Not that “Love & Hip Hop Atlanta” fans would know it, but Bambi Richardson says things are actually pretty cordial between Momma Dee and her for one reason — R-E-S-P-E-C-T for her husband’s mother.

Bambi chopped it up with Raquel Harper on the ‘It’s Tricky’ podcast, opening up about her strained relationship with Lil Scrappy‘s mom, Momma Dee … and admitting things aren’t always the way they seem on TV.

In true Momma Dee fashion … she fired back and, in the process, took some shots at Bambi.

She wrote, “I’m down for who down for me I’ve never heard bam even give a f*** about what I ate. Send me flowers for my birthday. Give me a greeting card I supposed to leave Shea alone because she’s insecure she’s f****** insecure and she’s dragging my son and my son and I are not even speaking because of her insecurity’s I’m done.”

That sounds salty AF, but Bambi claims she’s never had a problem with Momma Dee having a friendship with Shay. On the contrary, she says there’s no issue with Shay and doesn’t even know her.

As for why MD went so hard … Bambi strongly hints her mother-in-law is simply creating drama to make ‘L&HH’ juicier. In fact, she tells Raq that when the cameras aren’t rolling she and Dee are so cool.

The bottom line: Bambi says if Momma Dee is pissed at her for real, she should keep that same energy … at all times.

Upload an image or take a photo of a …

Paris Jackson says 'I tried to kill myself many times'