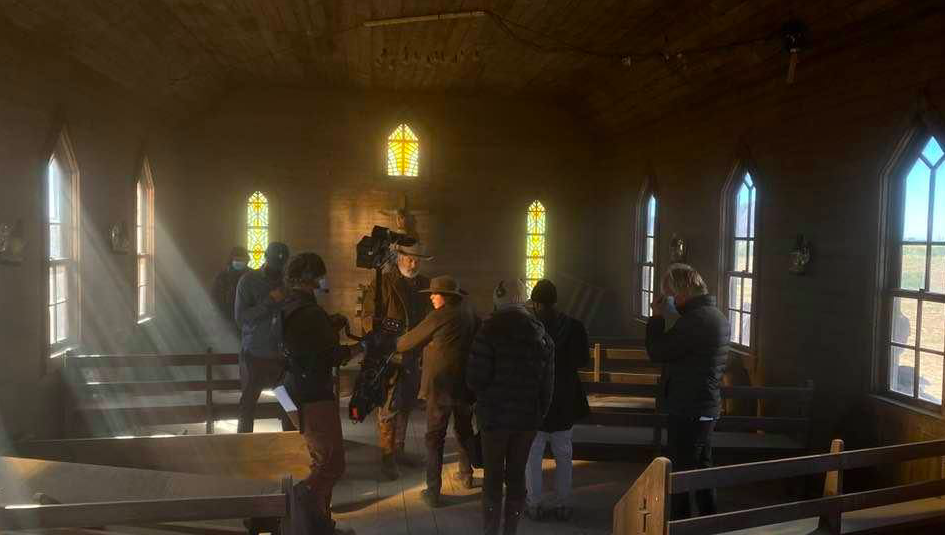 The gaffer on Rust has shared the last picture of cinematographer Halyna Hutchins on set, before she was fatally shot.

Hutchins, 42, died from her injuries after being shot by a prop gun discharged by Alec Baldwin on the set of the Western movie in Santa Fe, New Mexico, last Thursday.

It later emerged that the revolver contained a live round.

Serge Svetnoy, the electrician on the movie and a close friend of Hutchins, has posted the final picture of the director of phototography on set, apparently in the same church where she was shot.

He posted the photo to Facebook, writing: ‘this is the last photo with Halyna on set.’

In the shot, Hutchins can be seen with her back to the camera, wearing a headset over her hat and a puffy jacket.

Svetnoy is standing to her right, while other crew members are seen setting up a shot for Baldwin, 63, who is in full costume as Harland Rust.

It is unknown when the picture was taken, but the scene was being set up in a small church with wooden pews, where Hutchins was shot.

Baldwin was sitting in a wooden church pew rehearsing a scene that involved ‘cross-drawing’ a revolver and pointing it at the camera lens.

The actor was explaining how he was going to draw the gun while the crew repositioned the camera due to a shadow when the gun discharged.

Director Joel Souza, 48, who had been standing next to Hutchins ‘viewing the camera angle’, heard what ‘sounded like a whip and then loud pop’.

According to an affidavit, Hutchins reportedly grabbed her ‘mid-section’ and stumbled backwards, and cameraman Reid Russell said that he heard her saying she couldn’t feel her legs.

Hutchins was taken by helicopter to the University of New Mexico Hospital, where she was pronounced dead.

The prop gun had been handed to Baldwin by assistant director David Halls – who was previously fired from another movie over a firearm incident – who took the revolver from a tray set up by armorer Hannah Gutierrez-Reed.

Svetnoy blamed Hutchins’ death on ‘negligence and unprofessionalism’ in an emotional Facebook post; no charges of negligence have been filed in the investigation into the incident.

Santa Fe County district attorney Mary Carmack-Altwies has not ruled out criminal charges in the investigation.

I'm A Celeb 2021: Kadeena Cox breaks down in tears after trial