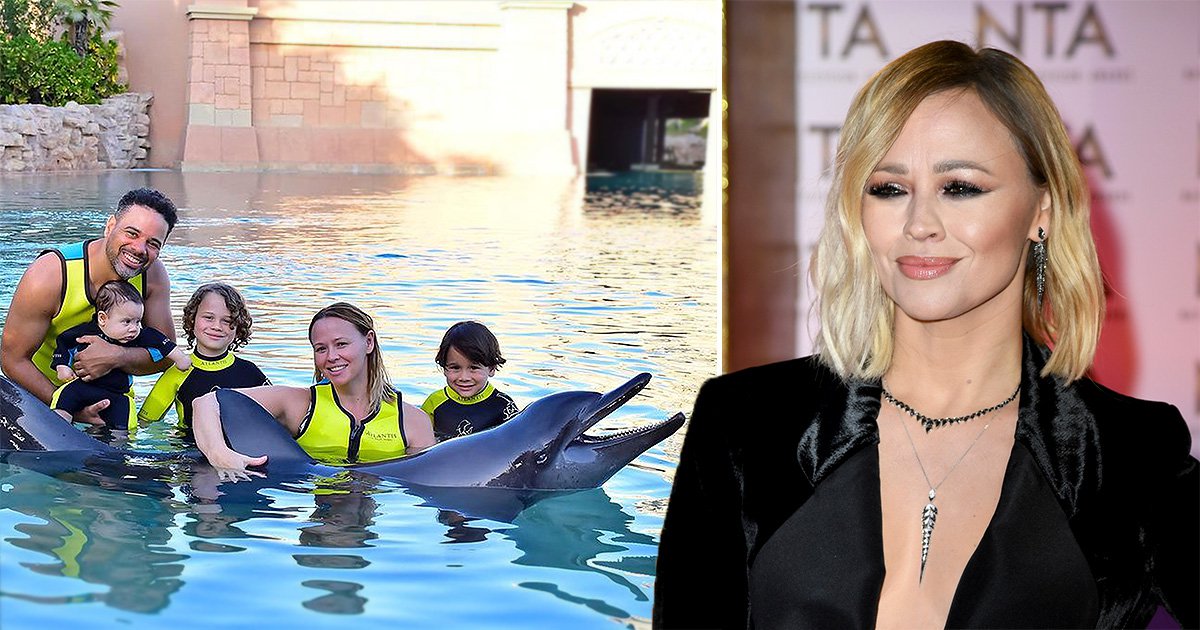 Kimberley Walsh has been contacted by animal rights organisation Peta after she shared photos of her taking her family to swim with dolphins.

The Girls Aloud star, 39, posted pictures of her with husband Justin Scott,39, and their children Bobby, six, Cole, four, and baby Nate, posing with dolphins in a sealife centre during their recent holiday to Dubai.

In the snaps, the family could be seen in a pool with the dolphins as well as planting a kiss on its snout.

Fans were disappointed that the family had chosen to swim with dolphins in captivity, taking to Kimberley’s comments to voice their disapproval.

The sentiment is echoed by Peta, with director Elisa Allen telling metro.co.uk: ‘For crying out loud – hasn’t Kimberley seen The Cove? If she had, she’d understand that dolphins used for these encounters are often violently torn away from their families and ocean homes.

‘Instead of exploring, raising their young, and swimming vast distances, dolphins in captivity are forced to spend decades performing confusing tricks in cramped tanks while being fondled by strangers.

‘Peta has contacted Kimberley with this information, which we hope will open her eyes to the plight of captive dolphins and will encourage her never ever to support industries that imprison wild animals for profit.’

Atlantis Resorts, which Kimberley tagged in her post, says it has ‘one of the most sophisticated dolphin habitats in the world.’

There are various packages, ranging in price from £134 to £248, where visitors can ‘meet’ a dolphin, interact with it, and go diving with the animals.

However, animal rights organisations such as Peta urge people not to swim with dolphins, as it can have a high cost for the animals themselves to be kept outside of their natural habitats without the chance to swim freely.

Shop and explore the best in cosmetics and beauty …