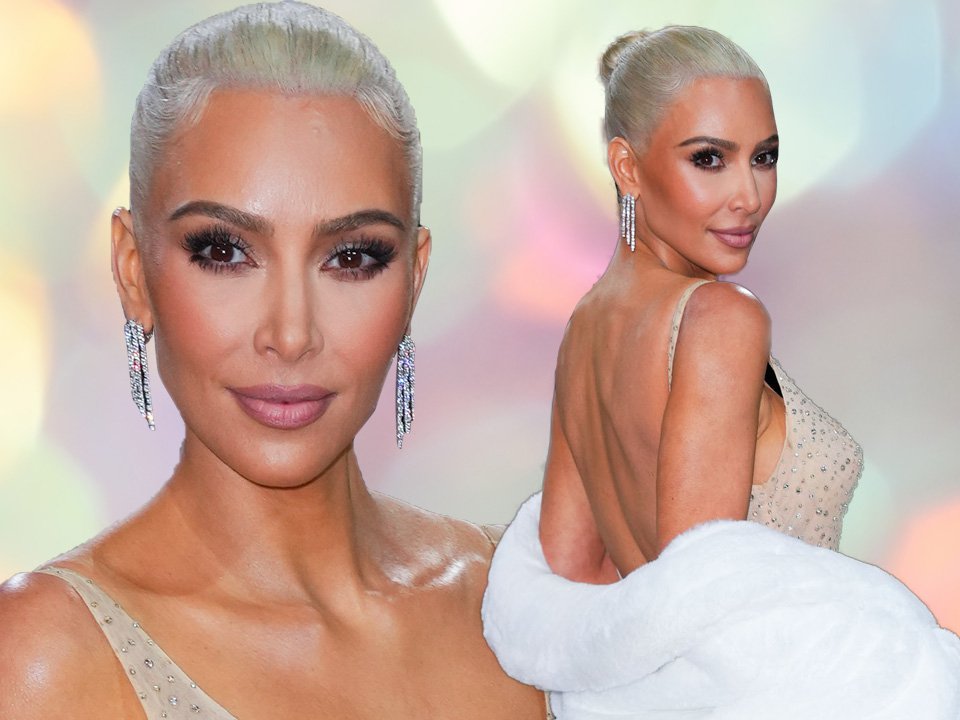 Kim Kardashian was concerned her hair may have fallen out after going peroxide blonde for her Marilyn Monroe makeover at the Met Gala.

The 41-year-old billionaire Skims founder and mother-of-four borrowed Monroe’s iconic dress from Ripley’s Believe It Or Not! museum for the event – which paid a staggering $4.8m (£3.9m) at an auction for the iconic dress in November 2016.

On Wednesday, Kim’s half-sister Kylie Jenner released a vlog to her YouTube account, which featured Kim saying that she was concerned her hair may be in trouble while preparing for the transformation, which included a bleach-blonde slicked-back hairstyle that took a whopping 10 hours to complete.

In the vlog, Kim enters with her hair wrapped in foils as Kylie is in a fitting for the fashion event, trying on her white baseball cap and wedding dress, which were worn in honour of the late fashion designer Virgil Abloh, who died aged 41 from cancer in November 2021.

In the clip, 24-year-old Kylie can be heard saying: ‘I can’t believe you’re really dyeing your hair’, then adds that Kim is ‘so bold’ for the transformation.

Kim then speaks to Kylie’s daughter Stormi, telling her that she’s going to go ‘blonde’ – just like ‘Elsa from Frozen’.

She adds: ‘I’ve been doing this for 10 hours already. I’ll risk getting my hair to fall out.’

The theme for the night was In America: An Anthology of Fashion and Gilded Glamour and the reality star pulled out all the stops to embody the vibe, ensuring she was the centre of attention at the Metropolitan Museum of Art’s annual high-fashion event.

The figure-hugging gown Kim wore is adorned with 6000 crystals and Kim admitted to Vogue that she’d lost 16lbs in order to squeeze into it on the day.

The reality star also revealed that she wasn’t able to do the dress up over her internet-breaking bum, and so had to leave the zip open and cover her modesty with a white shawl similar to the one Monroe wore when she sang Happy Birthday to John F Kennedy in 1962.

This isn’t the first time that Kim has rocked a blonde hairstyle – she’s opted for the look many times in recent years.

In 2009, the brunette star dyed her long tresses a honey-blonde, while also tinting her eyebrows a lighter shade in order to blend in.

In 2013, she also added some honey-blonde highlights to her naturally dark-coloured hair.

Her first foray into a super-blonde hairstyle came in 2014 when she rocked a sunny, California-girl look with long blonde streaks.

In 2015 the television personality first attempted a bleach blonde do – which took her from her natural dark brunette to a short blonde lob, however, afterwards, she revealed that it had seriously damaged her hair.

The following years of 2016 and 2017 saw the star also trying out bleach blonde looks, but, also experimenting with braided styles.

This year’s Met Gala is the first time that the Kardashian-Jenners were all in attendance, with Kim, Kris, Kourtney, Kendall and Khloe all at the fashion event.

Ian Somerhalder Auditioned for 'True Blood' Before Booking 'The Vampire Diaries'; 'I Always Wanted to Play [a Vampire]'