Joe Exotic was not among the more than 100 pardons and commutations President Trump issued early Wednesday.

Private investigator Eric Love, who is part of Exotic’s legal team, said Tuesday evening he was confident the ‘Tiger King’ star would be receiving a pardon before the president’s term ends Wednesday.

“We will be standing by waiting for President Trump’s confirmation of the Tiger King Joe Exotic,” Love said from inside a limousine waiting to pick Exotic up from a Texas prison if he was pardoned and released, KFOR-TV in Oklahoma City reported.

“Much love to the fans. Thank you so much for all the support. God bless. We’ll see you as soon as we get the pardon.”

Exotic, whose real name is Joseph Maldonado-Passage, was sentenced to 22 years in prison for his role in a murder-for-hire plot that targeted his chief rival, Carole Baskin. The story was featured on the Netflix documentary miniseries “Tiger King.”

On Monday, Love said “I am absolutely confident that we are going to receive the pardon tomorrow. We worked very hard on it,” according to KOCO-TV in Oklahoma City.

He added his team had brought supplies for “hair, makeup, wardrobes” and a doctor and mental health expert on hand in the event of his release. 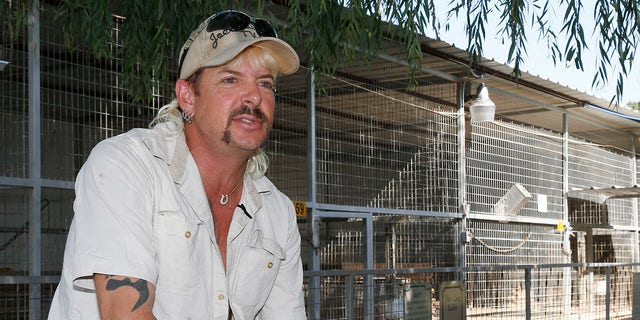 Joseph Maldonado-Passage, also known as Joe Exotic, is seen at the zoo he used to run in Wynnewood, Okla., Aug. 28, 2013. (Associated Press)

Among those pardoned by the president were former White House aide Steve Bannon and rappers Lil Wayne and Kodak Black.

Exotic’s team filed a 257-page application for a pardon in September, KOCO reported.