Jennifer Lopez had an interview with Jay Leno where things got a little too personal. He couldn’t stop looking at her bra, and he let the audience know about it. Here’s how J.Lo responded when Leno made a fuss about her bra.

Lopez chatted with Leno on his late-night show back in 2001. She was there to talk about her movie, The Wedding Planner, which also starred Matthew McConaughey. However, the conversation didn’t immediately focus on Lopez’s movie. Instead, a chunk of the interview focused her appearance—specifically her bra.

Leno started the interview by telling Lopez she “looked cute.” Then he said, “I guess that’s the look, right?” The former Tonight Show host saw that Lopez’s bra was exposed, so he made a comment about it. Lopez noticed Leno was looking at her chest, so she responds, “To see the bra? Because that’s what you’re pointing toward.”

Leno explained that “this is a problem guys have.” He said he wasn’t sure if he was or wasn’t supposed to look at her bra. After talking to the audience about it, Leno said, “Can I just get something out of the way?” He takes a long look at Lopez’s bra and then says, “Now we can continue.” 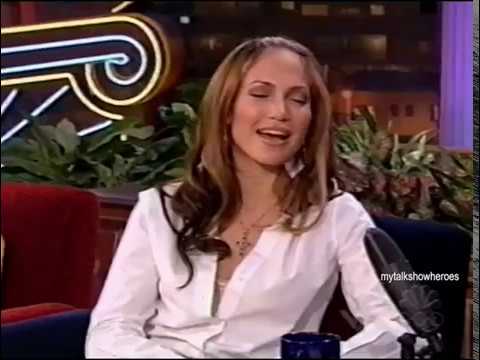 Lopez seemed to take Leno’s joking well. She stopped to point out that her bra had a “cute little bow.” She later told Leno the bra is supposed to show because that’s the style of her outfit. Leno mentioned that Lopez was voted “best legs” by Hanes, and he told her she had “beautiful legs.” He also said he liked that she seemed to be comfortable in her own skin.

Lopez agrees that she’s comfortable with her body (in another interview, she admits she had insecurities in other areas of her life). “I’m comfortable with myself,” says Lopez. “But I think that comes from my upbringing with my mom and my family. I think it’s a good thing; I think everybody should feel comfortable with themselves.”

Jennifer Lopez in the tabloids

Although the interview was supposed to focus on Lopez’s movie, Leno went on to talk about some of the gossip he read about her. He mentioned two articles he read about her love life. At the time, she was dating Sean “Diddy” Combs. She responded by saying she doesn’t pay attention to the gossip pages. “I can’t,” says Lopez. “I can’t keep up with it.” When Leno asks if one tabloid has more truth than the other, she says, “They’re just all full of it.”

Leno finally gets to Lopez’s movie, The Wedding Planner. She says it was a little scary to star in this film because it was her first comedy. Before that, she was in Selena and The Cell. Overall, Lopez handled the interview well and kept things lighthearted.

RELATED: Why Jennifer Lopez Uses a Body Double in Some of Her Movies

Michael J. Fox turns 60 — His life and career in pictures