Morgan Stewart rose to fame on “Rich Kids of Beverly Hills,” a series that aired on E! from 2014 through 2016. She would later ink a deal to join E! as a co-host on the network’s “Daily Pop” and “Nightly Pop” news shows. In addition, she’s also a clothing designer and has a brand called Morgan Stewart Sport, which offers an array of cozy chic activewear.

Stewart and her husband Jordan McGraw, son of talk show host Dr. Phil, welcomed their daughter, Row, back in February, according to E! News. “Row Renggli McGraw just quickly wanted me to update you guys that after 30 hours, 27 apple juices, [and] 16 pushes later that she decided to join our party! And she’s definitely the coolest girl I’ve ever met,” Stewart captioned an Instagram photo of her holding her newborn at the hospital. Due to coronavirus pandemic protocols, Stewart and McGraw’s birth plan may have looked a little different; for example, their mothers — who were both overjoyed to welcome a granddaughter — parked outside of the hospital and held pink balloons on the sidewalk. “The grandmas came to cheer us on,” Stewart captioned a pic on her Instagram Story at the time, according to E! News.

Both Stewart and McGraw have shared several photos of their baby girl, and are simply over-the-moon in love with the little one, who has some seriously awesome hair (and the most impeccable style ever). On September 8, Stewart and McGraw shared some more exciting news. Read on to see their announcement.

Morgan Stewart is pregnant with her second child 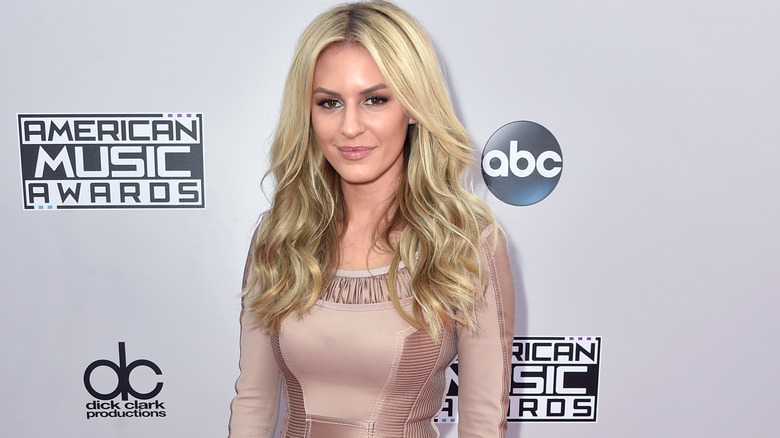 Morgan Stewart is pregnant with her second child! The former reality star took to Instagram to share the exciting news, posting a photo of her baby bump. “Maybe this baby will look like me??” Stewart captioned the photo, pointing out that her daughter, Row, is the spitting image of Jordan McGraw. The proud dad also took to Instagram to share the news, captioning the same snap with “Round 2.”

Stewart opened up about her first pregnancy during an episode of “Nightly Pop,” and admitted that she was nervous about giving birth. “I’m gonna tell you guys a secret. I’m a little worried about the whole labor part — just a little nervous about that. But I know you didn’t expect that,” Stewart said, sarcastically, according to People magazine. “I know that it’s shocking news. No one ever says that. But I’m worried about the pain and I’m worried about the potential ripping of anything. I’m quite scared,” she admitted. Fortunately, the labor part turned out okay, and Stewart now knows what to expect as she prepares for baby number two!

Beauty and the beast if i can’t love her