Home » Celebrity » Ina Garten's Filet of Beef Recipe Is So Easy to Make, the 'Barefoot Contessa' Star Says It's Really Worth the Splurge

Ina Garten has many budget-friendly meal ideas but says her filet of beef recipe is so easy it’s worth the hefty price tag. The Barefoot Contessa star’s recipe only uses a few ingredients and she tops it with “the best sauce.”

Garten demonstrated how to make her simple filet of beef recipe on an episode of Barefoot Contessa. “Filet of beef is sometimes called a beef tenderloin or a whole filet but when you get it like this, it’s called trimmed and tied,” she explained. “And you want to ask the butcher for that. It’s got all the sort of silver taken off and it’s all tied very neatly so it bakes in a very nice form and round. And it’ll bake evenly.”

Garten used a large filet of beef she said would feed 10 to 12 people so it was rather expensive. “And it’s so easy to make, every once in a while it’s really worth doing,” she shared.

The Barefoot Contessa star first patted the beef dry, then spread room-temperature butter over the outside of the meat. “This is just going to keep it really moist and it’s going to make a nice base for the salt and pepper that I’m going to put on,” she explained.

Garten sprinkled salt and pepper over the meat, placed it in a roasting pan, and baked it in a 500 degree Fahrenheit oven for exactly 22 minutes for rare and 25 minutes for medium-rare.

“Now the key to this is you have to have a really clean oven,” Garten said. “Otherwise, you’re going to smoke everybody out of the house.”

When the cooking time ended, Garten allowed the meat to rest on a board, covered in foil.

The ‘Barefoot Contessa’ star makes an easy sauce for the steak

Garten shared the process for making an easy sauce to serve with the steak. “Years ago, when I was catering a party, the chef gave me everything I needed for the party,” the Food Network host recalled. “And she went, ‘Oh my god I forgot to give you the sauce.’ She had forgotten to make it. She handed me a quart of heavy cream and all the flavorings for the sauce and said, ‘Just boil it.’”

Garten added, “I thought she was out of her mind. But in fact, it makes the best sauce.”

The Barefoot Contessa star brought the cream to a boil in a pan, then lowered the heat and simmered it for 45 minutes. “And it’ll thicken, just like a white sauce,” Garten explained.

She broke gorgonzola cheese into pieces and added it to the cream. Then Garten added parmesan cheese, salt, pepper, and parsley and stirred to combine the ingredients and melt the cheeses. 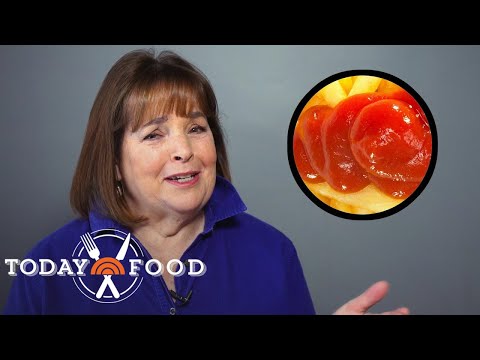 Garten’s filet of beef recipe is a winner, according to reviews left on the Food Network recipe. “Perfection! Followed the recipe exactly with a 5lb filet and it was perfect for our family birthday celebration!” one person commented.

“Wow!!! Yet, again, Ina’s recipe is perfection … it was amazing,” another fan raved.

One fan shared, “Spectacular!!  So easy and impressive … I trust Ina so even though the meat was expensive, I used the recipe without testing first.”

Some reviewers added tips for keeping the oven from smoking. “I tried the idea of placing the loin on a rack with water in the pan below it. Everyone, that does the trick with preventing the smoking,” one person reported. “As the butter melts, it drips into the thin layer of water preventing any smoking.”

The full recipe is available on the Food Network website.

There are many celebrities from Philadelphia, such as Patti LaBelle…