Home » Celebrity » Amanda Kloots says that she added her vocals to a song started by her late husband, Broadway star Nick Cordero 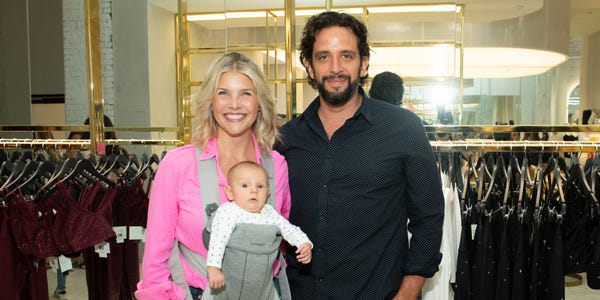 Amanda Kloots, the wife of late Broadway star Nick Cordero, honored her husband's memory by finishing a song that he started recording before his death.

Cordero died on July 5 after a lengthy battle of complications from COVID-19, the disease caused by the coronavirus. He was in a coma for months and had his right leg amputated as a result of COVID-19 complications.

Amanda Kloots said in an Instagram post on Thursday that she worked with Rickey Minor, a music composer and producer, to help mix her own lyrics with her Tony Award-nominated husband's in the song he started, "Not Far Away."

Tonight I got to work with musical legend Rickey Minor on a very special song, a Nick Cordero original. Rickey has been my great friend for years and I’ve watched him win Emmy’s, conduct the Oscars and work with every famous artist like Whitney Houston and Rhianna. Tonight, he said YES to working with me. Nick wrote a song about his losing and missing his father, called Not Far Away. He posted it on Instagram, but only wrote one verse and chorus. Our friend Maddox had the idea for me to write the second verse and then sing a duet with Nick. Rickey and @lennywee helped me, added our voices together, mixed and arranged it, then added beautiful strings and chimes to create this new duet. This was one special night… I got to sing with Nick! It was hard living up to my husbands vocals but I closed my eyes and pretended we were onstage singing this song together. I cried a lot, but Rickey guided me through it every step of the way. I’m so grateful that I’ll have this song always and that Elvis will too. Thank you so much @rickeyminor and @lennywee for taking the time tonight to make me feel like a rockstar.

"Not Far Away" is about grief and emotions that Cordero felt following the death of his father. Though Cordero previously posted about the song on his Instagram account, according to Kloots, it was unfinished with just one verse and chorus.

Kloots said that one of her friends had the idea to mix her vocals in with Cordero's. The duet was then mixed and arranged by Minor and another orchestrator, Lenny Wee, and together they added strings and chimes to the song.

Kloots also wrote about the experience of hearing her husband's voice.

"It was hard living up to my husband's vocals but I closed my eyes and pretended we were onstage singing this song together," she wrote on Instagram.

"I cried a lot, but Rickey guided me through it every step of the way. I'm so grateful that I'll have this song always and that Elvis will too," she added.

Users shared their responses to Kloots' meaningful tribute to Cordero.

"Oh Amanda. This is heartbreakingly beautiful. What a special moment for you and your Nick," one user wrote.

"I have tears … Because this is beyond special," another commented.

A makeup and skincare line from supermodel Tyra Banks…

Celebrities who look much younger than they are…