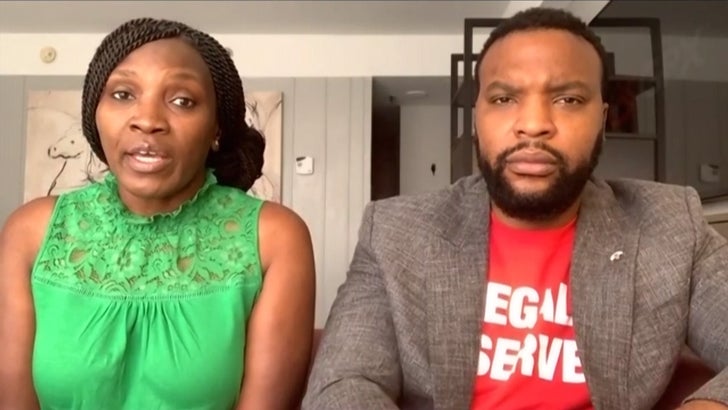 7:10 AM PT — Cooper-Jones joined “TMZ Live” and had a strong message she wanted to deliver to Breonna’s mom saying, “I know it has to be very uncomfortable to know that your child was taken away and no one went to jail as of yet.”

And, her message to Tamika is “don’t give up” on seeking justice. The Arbery family attorney, Lee Merritt, also said, even though there hasn’t been video that’s emerged in Breonna’s case there’s hope for justice because “we’ve seen cases take off because of public pressure.”

The Ahmaud Arbery murder case is moving at lightning speed … seemingly light-years faster than the Breonna Taylor case … and TMZ’s learned both of their mothers will join forces in their fight for justice.

Lee Merritt — attorney for Ahmaud’s mother, Wanda Cooper-Jones — tells us … Ahmaud’s mom is all set for a face-to-face with Breonna’s mother, Tamika Palmer, Thursday in Louisville. It will be their first face-to-face meeting.

Wanda, who flew from Georgia to Louisville Wednesday night, is in for a busy day … we’re told after her sit-down with Tamika, she’s scheduled to meet with lawmakers and local activists to fight for justice for Breonna.

Merritt will accompany Wanda as they lobby to have the Louisville police officers involved in Breonna’s death arrested and charged. They will also lobby for federal intervention … the feds could charge a civil rights violation … something they did in the Rodney King case to secure convictions.

One item at the top of the agenda — the Justice Act, which was just introduced in the State Senate and calls for police reform, transparency and accountability. Merritt tells us the bill doesn’t go far enough to help Breonna’s family get justice.

Meanwhile, the cops involved in Breonna’s death have yet to be arrested. As you know, Breonna was shot 8 times after cops entered her home in the middle of the night looking for someone else. They also lied and said in the police report she was not injured.

His beauty her beast

Beauty and the beast 2017 belle